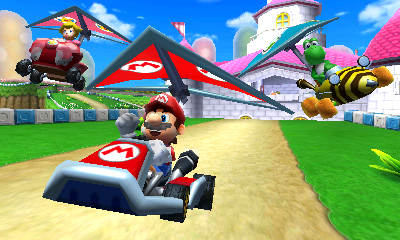 Mario Kart 7 delivers its expected thrills brilliantly on the 3DS. Familiarity may have bred contempt with Mario Kart, but to miss out on this would be a real shame.

Amidst all the talk of the PlayStation Vita promising to squeeze a full console game onto a handheld, it would be easy to overlook the achievement which Nintendo has made here. Mario Kart 7's crowning achievement is that it is the excellent Mario Kart (Wii) reproduced almost perfectly on the 3DS.

Along the way Mario Kart 7 has picked up a few new tricks. The addition of the gliding adds a new approach to mastering some levels and provides additional challenges of its own. Additionally, the view can be put into first person for a really immersive experience where the 3DS' gyros are used to steer through tilting. I personally found this extrememly hard to get on with, but it is an engaging approach and the motion controls are sensitive and balanced well with the display.

It is the excellent Mario Kart (Wii) reproduced almost perfectly on the 3DS.

Making an appearance for the first time in Mario Kart is Wuhu Island. This is the setting which first appeared in Wii Fit's jogging mode and has since been used as the location for Wii Sports Resort (Wii) and Pilotwings (3DS). The island can be explored further through two new tracks for Mario Kart which I think are a real highlight.

The Wuhu Island levels feature a single long track, rather than the 3 laps of a circuit which is usual with in Mario Kart. It might not be to everybody's taste, but I find that exploring more and more of the different areas of the island cannot help but suggest the possibility of a narrative space and I'm always left wanting to explore more.

I almost want a Skyrim that allows me to hike around Nintendo's mysterious island. I can even feel the pull of wanting to write some Wuhu-Island based fan fiction.

As with the Wii version, the online aspect of this game is first class and probably unrivalled on the 3DS. It offers online racing for up to 8 players, as well as community groups and the sharing of Time Trials ghosts to provide an addictive challenge and a handy way to learn new approaches to tracks.

After the time trials, it is the online racing which has me most hooked. Starting out with 1000 points, you gain score as you win races online. However you also lose points for placing low and I'm not always very good. A few times my score has ducked below that initial four-figure threshhold and the sight of that debt to myself has me scrambling to play just a few more matches to claw my way back to breaking even. As with my story, I found that like a broken gambler I have to keep playing in the belief that I will win it all back. But no matter how hard I try, the house always wins.

The online aspect of this game is first class and probably unrivalled on the 3DS.

Sadly I discovered that the ability to drive as my Mii appears to be unlocked as a reward for completing a certain amount of the game, rather than a choice given to me from the beginning. This is a real pity as I would have liked to be able to race as myself from the start, especially online.

A few gripes break what is otherwise a faultless experience. The Blue Shell is still a game breaker, in single- and multiplayer. There's no easy way to add people to your friends roster with whom you've enjoyed playing online. Also, the camera angles at some points on the new 3DS edition tracks are often entirely unhelpful, especially around tight corners.

All in all, though, Mario Kart 7 is an exceptionally good title, with a huge range of tracks and gameplay options on- and off-line. It's probably no more or less definitive than the Wii version but it is a leap ahead of the DS edition. The combination of the great new tracks, the portability and the immersive 3D makes it an essential 3DS title.

You can support Chris by buying Mario Kart 7