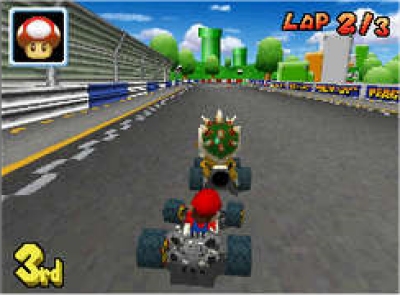 I've been meaning to put a few words together about Mario Kart Wii for some time now. It is reviewed elsewhere on the site but it's always nice to get a second opinion, in my case from a returning gamer that had never played the previous six releases of this title. Can I just say for the record though, before you ask, yes it does come bundled with the wheel. Separate wheels can be purchased cheaply but go for an official one if you can. Once you get good, ditch the wheel and use the Wii-mote + Nun-chuk for a much more accurate drive.

Now the situation with Mario Kart Wii is interesting. It sold over a million in a month upon its release. It is pretty much out of stock leading into xmas. Almost everyone you speak to that has a Wii owns the game and loves it, yet there is very little in the way of public fanfare. Nintendo have a habit of doing this, Super Mario in the late 1980's sold some 18 mill ! At the time of writing (Dec 2008), the game has sold approx 10 million copies. That is approximately 1.5 million sold a month since April. Pretty much everyone in the office where I work has it, or is trying to get hold of it. I'm mystified by the lack of positive press about the game, it made me apprehensive about spending 35 pounds on it. Hopefully my review will shed some light on it's popularity and appeal.

The action takes place over some 32 tracks, split into various grand prix's, there are 4 tracks per grand prix. Battle modes are also available as are coin runner competitions, utilising retro tracks and new, but this review concentrates more on the racing aspect.

After you reach a certain level, you get to play as your Mii character!

There are oodles of characters to choose from including Princesses, Donkey Kong and Mario himself, many characters are unlocked along the way. Each character belongs to one of three weight categories and this in turn dictates the vehicles that you can choose. After you reach a certain level, you get to play as your Mii character! Adjust your Mii weight and you will notice that your available vehicles change accordingly - brill.

In terms of vehicles you get to choose a kart or a bike, it is fair to say that there is no catch all vehicle that is superior to all the others, they all handle differently on different tracks. Tricks can be performed on either kart or bike for a speed boost. As you career your way around, you have the option of drifting to use boost, if you go for a motorbike then pull a wheelie for extra speed also , but be careful as steering is reduced and you are an easy target. Some vehicles you may consider to be similar to an Austin Allegro or a 50 cc Moped, but on the right track they can still do the business.

My daughter is nearly four and a half and we have been playing this game on and off since April. The controls are too difficult for her at this age but she just loves trying, there is something so enduringly appealing about the tracks and characters. She puts in a good deal of thought into which track, character and kart or bike she wants and over the months her dexterity has improved massively which is great to see. She often asks to play this one, and I'm still happy to oblige after several months.

Don't be put off by your first few attempts at racing, you will be left with a feeling that it's a bit difficult and that the AI of the computer characters is poor. Stick with it, things get better. In no time at all you will have memorised the tracks and realise that the AI has been done perfectly. Games can be evened out by boxes yielding items such as the torpedo boost for those at the back make. Some of the appeal comes from the fact that it is possible to find yourself languishing right at the back going into the final lap and still win - on any track.

You may or may not know that a large part of the game involves collectible boxes that are spread across tracks. These contain a wonderful array of items that allow mostly beneficial actions to be performed such as throwing oil at opponents, tripping them on bananas, boosting mushrooms, invincibility and many more. This latest release contains some new items such as the blue torpedo which takes out the person in first place. One criticism would be that this potentially takes you out for too long and evens things up a bit too much in my opinion.

their Mii's wave at you in a manner very similar to the way our European chums used to do so on 'Going for Gold' with Henry Kelly in the 80's.

The online play is stunning and incredibly addictive. I'm used to fiddling around online trying to join games and get them started etc. None of that nonsense with Mario Kart. It starts by connecting you to up to 12 other racers in a flash. It shows you where they are on the globe, and their Mii's wave at you in a manner very similar to the way our European chums used to do so on 'Going for Gold' with Henry Kelly in the 80's and early 90's. If your mates are online you can join them and a nice touch is that you can view your head to head running total.

The online action is just fantastic, it's almost endless excitement. The ranking system ensures that those with a high ranking drop masses of points for a poor finish, and it takes a while to build back up. Beginners on the other hand, can score many points for beating better opponents. There is just the right balance of luck, skill and chance involved. For instance by throwing turtle shells I have beaten opponents before when they have been 1 yard from the finish. Be careful about putting it on at say 11pm, you will be playing until 2am I promise, particularly if you have visitors that fancy a game. It works both ways though, you can have nights where you can't seem to get anywhere through bad luck and you are taking to the brink of gaming despair. When an online race finishes, you get to nominate a track and the computer picks one at random based on those nominated, but you don't have much time as you will be automatically enrolled into the next race. This means frantic toilet or drink dashes, maybe having to use a vase, and it all adds to the thrill. A headset would just top it all though, but is not available yet for the Wii.

Mario Kart Wii is like a cartoon version of the burnout series but less serious, more fun and incredibly addictive. I wish I wasn't a returning gamer - I wish I had played all of the others. Perhaps it is best that I didn't, I probably would not have found a girlfriend and subsequently started a family. It was touch and go back then even as I could not tear myself away from Destruction Derby and Gran Turismo. Personally, I have to say Mario Kart Wii is the best game I have played to date. OK it may not be everyones cup of tea, it may not look the best or sound the best, but it plays the best - trust me.

You can support Sinan by buying Mario Kart Wii