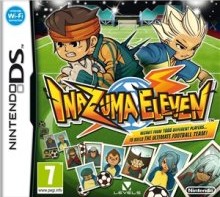 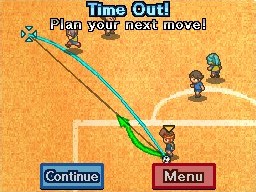 Inazuma Eleven combines Anime-style roleplaying with a quirky football simulation. I really wanted to like it. I really didn't.

Inazuma Eleven attempts to use Football as the action element in a cartoon role-playing adventure. In narrative terms it understands the passion well, weaving its rags-to-riches story about an enthusiastic young player in a run-down school club without motivation. He rallies his friends and recruits fresh players to take on a series of matches which will save their club and prove their worth.

It's very well presented, with great quality animation and voice talent. It's from the same developer as the Professor Layton series and all the production hallmarks are on display. The Football sections are controlled by drawing lines with the stylus for players to follow. I found this initially confusing compared to other, more direct Football games; however once mastered it provides a great insight into the movement of players on the pitch and the need to set up strategic plays to confuse the defence and the goalkeeper.

The smaller encounters are fairly entertaining, replacing the random monster battles of an RPG like Dragon Quest VI with sudden four-a-side challenges to gain possession or score first. Where Inazuma Eleven really fails is in the incorporation of 'special moves' into the main Football match challenges.

The drama created by a Football match revolves around possession of the ball, the effectiveness of player positioning and prepared set pieces and ultimately the skill of eluding the keeper. Inazuma Eleven actually succeeds in simulating Football very effectively, in that it provides the tools for a player to position team members, define a strategy and then see that strategy play out.

That would be fine if that is as far as it went. Unfortunately, each player has stats which affect the success of tackles, saves and the like and skill points can be used to unleash special moves. These add a role-playing progression to each character as new abilities are unlocked but I found it detracted from my enjoyment of the Football challenges.

The magic skills undermine the drama of Football. The story I related above is my own experience of running an extremely successful play against the opposing team. The keeper was wide, my striker was onside and I had a clear shot at the goal. However, the hidden mechanics of the game decided to deny my achievement.

To make matters even worse, most of Inazuma Eleven's statistics are calculated behind the scenes. I don't even know what factors contributed to the special move which ended my game. This also applies to fouls, which seemed to be decided in a random fashion. The only calculated statistic which is presented to the player is in tackle challenges.

In narrative terms it understands the passion well, weaving its rags-to-riches story.

The problem here is the way the game provides difficult action sequences for the player to overcome, but then decides the outcome using in-game stats. The player is already given a considerable challenge in having to wrestle possession of the ball, guide it through the opposing lines and make a successful challenge. Having done this, however, the fruits of the player's skill are then arbitrarily decided by in-game mechanics. It would be like a driving game introducing random engine explosions in the last lap of a race, or a golf game introducing teleporting holes.

I'm not much of an ardent Football fan myself, but I still felt enormously cheated that my efforts in-game had been negated by an arbitrary role-playing mechanic. This actually blocked my progression in the game, having failed to beat the same match four times in a row. Each time I was ham-strung for the same reason, by a special move which cancelled an almost certain goal. Inazuma Eleven left me feeling so frustrated I actually struggled to sleep after playing it.

The creators of Phoenix Wright and Professor Layton have made a good stab at trying to create a stirring cartoon Football drama, but fail to overcome the challenge of combining player skill with character stats. Inazuma Eleven is neither an enjoyable role-playing adventure nor an entertaining or accurate Football simulation.

You can support Chris by buying Inazuma Eleven