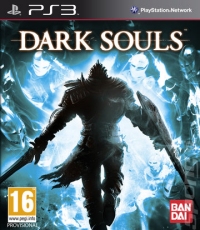 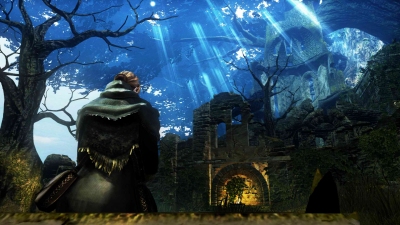 Dark Souls is marketed almost entirely on the premise that it is difficult. There's actually a lot more to it and I found that the most difficulty thing wasn't the gameplay itself.

Dark Souls has grown a reputation for being hard. Perhaps many feel that other games dumb-down, or are too carefully designed to ensure every player can reach the end. I certainly remember when game designers were bemoaning the fact that 80% of players never saw the last 20% of a game. Perhaps modern games are the result of that that: either don't spend money developing content most players won't see, or make sure everybody can make it to the end of a title.

With this game, From Software have taken an almost polar stance. There is an awful lot of content that neither you or I will ever see, even if we were to find a way to play Dark Souls well. There seem to be paths only open to particular character classes or those with particular abilities. All of that is on top of the very challenging gameplay which will provide a block to many players.

To master the game requires a precision with each enemy type.

But without wanting to blow my own trumpet, Dark Souls isn't actually that difficult in its mechanics. Any solo role-playing experience is often about taking a cautious approach to tackling enemies. I have fond memories of playing Angband, in which the first couple of hours could easily be spent fighting back and forth with a lone worm, trying to raise a weedy priest to a level sufficient to survive other enemies.

It is definitely challenging, with combat stratagems and timing playing an equal role with stats and grinding. As my story tells, even the lowliest of opponents can prove fatal if due care is not taken with each encounter. The insult to the injury in this case, is that gathered XP (called Souls) is left at the point where the player dies. However, if one dies before reaching the same point, that XP is lost forever. This makes grinding for XP and levels extremely difficult.

It wouldn't be an RPG without masses of equipment options and pages of stats. All kinds of different skill areas can be tweaked, but once again I found myself struggling to really engage with these numbers. If I make a change to my character which alters his defence from 83 to 84, am I really seeing a marked change in my game experience as a result of this? I like the idea of the grand adventure, but I find that these elements don't get my imagination racing. I prefer the approach of a game such as Dead Space, where every stat upgrade makes a significant impact upon the gameplay.

As a storyteller, Dark Souls doesn't lead me forward in a way which I enjoy, particularly. In spite of a lush fantasy opening, a backstory with real originality and an immersive setting, there is little narrative to the game. Strewn around the floor are some poorly worded clues which only make sense in hindsight and much of the game world is left for players to discover through exploration. Dark Souls also avoids hand-holding. Despite setting up a clear quest it does very little to tell the player where they should be going or what they should be doing. It feels empty of narrative and the actual landscape a bit bland.

It's an adventure in the truest sense of the word.

For some, however, I can imagine that this approach would be enormously immersive. It's an adventure in the truest sense of the word. The hero must explore the landscape for clues to new ways forward, leads and a sense of purpose. Each success is hard won and is all the more satisfying for it. The social gaming sites are buzzing with chat about how to win and players arrange to join up online to defeat the more challenging opponents. The hardcore faithful are studying every last nuance of gameplay.

This brings me to the real reason I believe Dark Souls is too difficult for me or many gamers to enjoy. It requires a massive investment of time and patience to make progress. I don't doubt that - for a gamer with very few other demands on their time - Dark Souls will be a richly rewarding experience. It is in the sheer amount of trial and error required and having to recapture enemy ground that provides the biggest challenge. Dark Souls is not a game which can be dipped into for an evening's escapism. For most it will represent a commitment of hours, days and weeks to make any sort of progress.

To master the game requires a precision with each enemy type, experimentation with different routes and sheer force of will to learn to defeat the bosses. Finding the time to do all that? Now that IS hard.

You can support Chris by buying Dark Souls