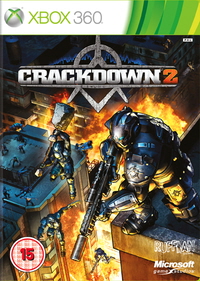 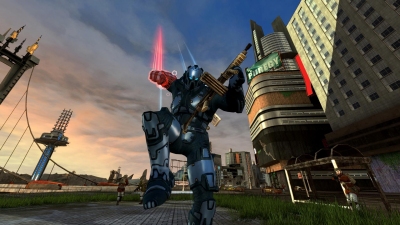 Crackdown 2, to eyes seasoned by classic sequels, was a huge letdown. It should have expanded on the first defining game, but in the end it was just 500 more orbs of the same - addictive, but familiar.

Before gaming lost its grip on me, the idea of a sequel was exciting. It had the potential to be anything and everything. It could be a continuation, an evolution, an addition, an exploration, even a redefinition. Zelda to Zelda II, Mario 2 to Mario 3, Bubble Bobble to Rainbow Islands.

Back then, a sequel was like encountering the park where last year's fair was to find a whole new fair glowing in wait. The possibilities were endless - recycled rides, new inventions, and a few things that seemed impossible to my young eyes.

Ten agility orbs. I remember this well. It's prettier than the first game, but even with the zombies and the big hole in the agency tower, it's still definitively Crackdown. I'm jumping from one block to another like a deranged pogo stick as I go after each of the glowing orbs - that in turn enhance my abilities and grant access to more. Jump to jump higher, agent!"

150 agility orbs. I know Pacific City wasn't exactly a hub of ideas before, but I don't remember it being this predictable. Coming back to Crackdown, to games in general, I'm craving new experiences. Still, I also quite like shiny collectibles. Maybe there'll be a new thing soon.

250 agility orbs. It's all a blur now as I pursue these 500 beacons hiding illogically on top of buildings. Pacific City's crime lords and police force seem less fun though. Tracking down the bad guys soon becomes dull and even the added zombies don't really make a big difference. But I can still revel in this old fairground rides.

A sequel was like encountering the park where last year's fair was to find a whole new fair glowing in wait.

400 orbs. Pacific City's citizens now cower before me. My strength is unparalleled, no man can jump higher, and I'm pretty handy behind the wheel too. I'm a god amongst men. Unfortunately, if I want to stop shooting one guy and shoot the guy next to him, I'm in a pickle. My crosshair will not budge, not even through mind-bending will, not until my berserk-like rage is satisfied and every bit of life juice is drained from my victim. So I go back to hunting those orbs.

450 orbs. The only colour is green. Crackdown 2 was meant to be a glorious resurrection of an unlikely giant that took the genre by the neck and forced it to look up. Instead, Crackdown 2 is a clone, just like one of its agents. "It looks the same. plays the same. It may as well be the same.

490 orbs. If Crackdown 2 is that new glowing fairground a sequel can be, it has returned without any new attractions. The rides have been shifted round a bit, and a few have received a nice paint job or a much needed tweak to the circuitry. But now the rusty rides and garish colours of the stalls are just too familiar. The novelty is gone, and age has left me weary. I've no time for the same old fair.

If Crackdown 2 is that new glowing fairground a sequel can be, it has returned without any new attractions.

499 orbs. Still playing. I am the sorry fool. My hands are glued to the controller, my eyes reddened and transfixed, dancing right then left then right again in search of jade shadows. I'm aware of the folly but oblivious to my ability to stop. Maybe it's to my credit that I can turn such a mediocre adventure into all-encompassing challenge, or maybe I'm wasting my life. But, regardless of a lack of ingenuity or new ideas, I'm chained to this old fairground to find this last orb.

You can support Sinan by buying Crackdown 2