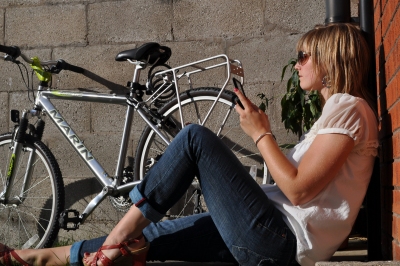 With that in mind, I've modded my decade old bike into something I could commute on. Having lived in Amsterdam, the thought of having a bike without a pannier rack seemed ridiculous. So I got one. It's good for lugging round both belongings and people! You haven't seen the full use of a pannier rack until you've been to the Netherlands. Those guys could write a book on things they probably shouldn't transport on a bike, but do anyways.

Of course, the next logical step was to buy an actual pannier bag. I had a good long think, and decided to go with Dutch brand Basil. I've seen their stuff before, and not only is it cute (which is kind of essential for me- I'm not into ugly bags) but really high quality. I got a single pannier shopper that is detachable, so I can use it to take my stuff to work and get some shopping done on the way home.

I've also changed the tyres. My previous tyres were mountain biking ones with all those knobbly bits on. These are fine for going round a forest but not so great for use on the road. I didn't want to go with slick tyres so I opted for some nice semi-slicks instead. They make me feel cool. And, even better than that, they're good for road cycling but can handle a bit of off-road if I feel the need. I like having these kinds of options available to me.

I decided it was high time to invest in a better saddle, as mine wasn't the most comfortable thing in the world. I got a reasonably priced one that handily has green stitching to match my bike's paintwork. It's all about the accessorizing.

Again, probably because of my video gaming assumption that I can press a few buttons and easily make these changes I fitted everything myself. Much to the shock of my builders, who sat and watched with great skepticism throughout my afternoons of modding. Maybe they just thought I'd finally completely lost it, as I did tend to be covered in dark bike oil with a huge smile on my face. Or perhaps it was the incessant picture taking - seriously, who takes 150 pictures of their bike on a patio? Either way, I was content once I was all done, whatever the builders were thinking of me.

The only problem is, now I've seen a new Marin. And I want it. Of course I would keep my old one, but the idea of having a shiny new one to play with practically makes me drool. Just think - a bike specifically to test new products out on and get dirty, and a shiny clean bike for the days when my other one isn't quite cutting the cool factor. It's enough to distract a girl from her shiny new 360.

You can support Tim by buying Bike Modding 101