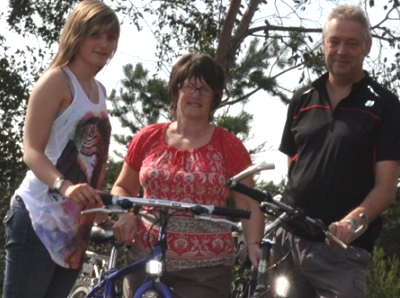 Gaming and biking put me in a similar mental state - adrenaline filled, distracted and buzzing. My brain seems to go into overdrive and come up with all sorts of ideas. My last gaming session resulted in me signing up for a charity bike ride.

It's strange sometimes how well things can fall into place. The past few weeks, I've been getting an itch to do some fundraising, and also set myself a new biking target. I've been thinking about these two things but not figured out exactly how to start.

When I need a solution to something, I tend to turn to games. Whether my mind is concentrating on racing virtual bikes round tracks, or fighting demons and saving the world, I usually come up with an answer to the problem. And sure enough as I played the other night, I was reminded of a poster in my office - why my brain needed to be so distracted before delivering the goods I'll never know. Maybe it's a girl thing.

I checked it out the next day. It was advertising the 'Tour de Furness', a local charity cycling event. I could see an idea forming in my head to raise some money and get myself a new cycling goal. A day later, and I had signed myself up as the leader of team Squashbuckle for a short race.

Ladies and gentlemen, in one month's time, I will be riding 13 miles to try and make some money for the Sunbeams Music Trust a music therapy charity in Cumbria. My team and I (when I say team, I really mean my parents who I've roped in) will be doing some short training rides over the coming weeks.

Pleased as I am with my new aim, whilst relaxing with Fable 2 late last night, I came up with another plan. This charity bike ride will be just the beginning. In April/May next year, I want to ride through the Lake District from Barrow-in-Furness to Penrith again to raise money for Sunbeams Music Trust. And I would also like to do the C2C later on next summer, provided I can persuade someone else to ride with me.

So, from now on, my evenings are not only going to be filled with adventures on the Xbox 360, but I'll be trying to fit in a few miles on the bike as well.

You can support Tim by buying Gaming Inspiration