Daring to Dress Up 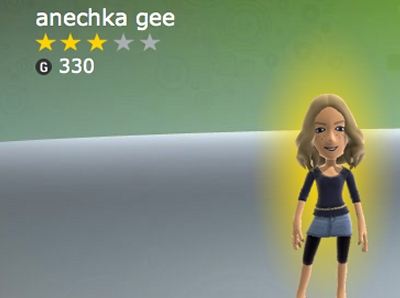 I've had close calls on the road a few times over the year but luckily no actual accidents, so I don't need to be persuaded to wear something bright and hi-vis. In the warmer weather I'm sporting my pink Karrimor cycling top which raises the occasional snigger, but I can live with that if it means cars can see me and stay out of my way.

As I was thinking about what to wear on a training ride for my upcoming charity event the other night, my thoughts inevitably turned to gaming. I sat for a while, thinking about all the time I've spent dressing up characters in games. The two who have gained most attention recently are my Xbox Live avatar and my Fable II character.

I begrudge spending money on my avatar so she only has free clothes that I rarely bother to change - although they are quite close to something I might wear. On the other hand, Sparrow has countless outfits that I like to change into at random points in my game - depending on how I'm feeling. Because she only spends in-game money, I don't mind her splashing out on some new boots or a skirt every now and then. And let's face it, with the wolf-whistles she gets, it's totally worth it.

I find it interesting that I pick much more daring outfits for my gaming characters than I would ever wear myself.

Don't get me wrong, like many girls I like to look good, but I err more on the conservative side in the real world. When it comes to game time, a corset and hot-pants combo with thigh-boots seems perfectly acceptable. I would love to know the complex psychological explanations behind this one.

Perhaps because I know it doesn't matter if people judge my virtual characters on their dress sense. It's easier to allow my gaming alter egos to stand out and be extravagant than it ever would be for me to wear outrageous clothes around my home town.

I guess I am a victim of other people's opinions. I care what people think of me, and I don't think I'll ever be able to leave the house in a corset. Not unless it's for a fancy dress party - but that's a different story altogether.

What I would really like to see more of are biking or racing games where you can dress up characters. Take Trials HD - you have basic control of what your guy wears, and the colours of his clothes. If this could be incorporated into a cycling game, where you can create your own cycling outfit or even design a jersey for your character, I'd be a happy bunny.

You can support Tim by buying Daring to Dress Up