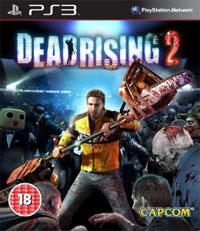 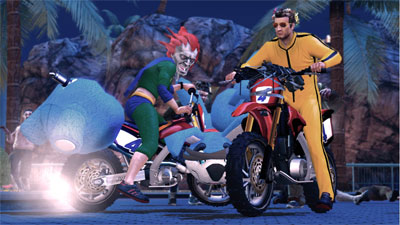 Dead Rising 2 wades through the gore with unexpectedly touching social commentary. Like a good zombie film, the violence is there because of what it represents just as much as its shock value.

Dead Rising 2 offered me a wealth of soulful content to devour once I got past my own parental zombie fatigue and the familiar Dead Rising setup. By skilfully using RPG elements and a healthy dash of Rogue-like mechanics I was able to appreciate the commentary on modern society that the game slotted in between bouts of gore and vomit.

Forced to take part in a zombie-killing game show in order to earn enough money to provide for his infected daughter, Chuck Greene is framed for the outbreak in Fortune City and must uncover the truth to clear his name. The setup might be different from the first game but the results are the same - I was soon stepping out into a zombie-infested mall.

A few hours in and its easy to dismiss this sequel as having the same problems that everyone loved or hated in its predecessor. This isn't a game that you can play your own way. You really have to learn to do as you're told, and in particular be cautious in where you go and what side-missions to attempt. The option to restart your game while retaining your level and your combo cards isn't there as some hardcore gamer only button - it's how Dead Rising 2 is meant to be played.

This powering up and loot collecting added depth but can be a hurdle for regular players. Just like levelling up a character in Demon's Souls, the thrill of going back to that first stage - which still holds a game over threat - and slicing through it with ease is worth every unexpected death or overpowered Psycho.

Those side-missions which cause so much pain and frustration - especially when, like me, you forget to save before encountering them - are perfect post-game content. It's like running through the main story to Dragon Quest IX and then tackling the myriad of extra missions that were previously too difficult to attempt.

The comparisons to Japanese Role Play Games (J-RPGs) are deliberate. Japanese developers made the original game and this sequel, created by the Canadian Blue Castle studio, feels like a suitable homage to those original design decisions. The western additions are present in the form of a three-slot save system and a more overt social commentary on America.

The real evil comes from other humans and this is where Dead Rising 2 finds little scenarios to explore some interesting issues.

In fact the game becomes less about zombies the further you progress and it's at the end that you realise that the shambling hordes are more a nuisance than a threat. The real evil comes from other humans and this is where Dead Rising 2 finds little scenarios to explore some interesting issues.

Dressed up in zombie blood and Chuck's own vomit (ed: eww), the game manages to throw in some damaged examples of humanity. From the Southern vigilantes who see the outbreak as an opportunity to cleanse America of Socialism, to the mailman who still demands a signature for his packages, to the security guard who hangs survivors for looting.

They all have stories to tell - some with oddly touching moments like that of Slappy the children's store mascot who, when defeated, will crawl to his dead love and curl up next to her before dying himself, but not before shouting "Don't worry, kids! Slappy will live forever!"

The blend of melodrama and gutter comedy works well in this setting.

The blend of melodrama and gutter comedy works well in this setting. But taken on its own the main story to Dead Rising 2 is far too serious. There's little of the insanity or zombie-humiliation when your talking to your fellow survivors and trying to figure out who or what caused the Fortune City outbreak. It does add its own flavour of parody with cut-scenes that linger for three beats too long on various females and dialogue that's heavy with sexual innuendo or veiled insults to Chuck's manhood.

None of this comes across as childish banter or awkward attempts at humour. It somehow fits the character of Chuck perfectly that people are so mean to him; despite the valiant task he has of protecting his daughter. The history of this setup, which is explained better in Dead Rising 2: Case Zero, is never followed up and although part of me wants to criticise this omission, a melodramatic storyline about Katey's zombie mother who bit her daughter wouldn't have worked as well.

I was more than content with the constant task of obtaining Zombrex for Katey to prevent her death and as a reason to keep killing psychos and rescuing survivors. Those vignettes of human character are the real shape of Dead Rising's soul and it delighted me to see, on some bizarre deep level, the game showing how people can react in an apocalypse. We can dress up in a maid outfit with a cowboy hat and slaughter other humans with little fear for the law. Or we can do our best to help people at every turn, all while bludgeoning zombies into a pulpy mess with a vibrator.

Those vignettes of human character are the real shape of Dead Rising's soul and it delighted me.

In this vein Dead Rising 2 is one of the most surprisingly soulful games I've played. Once I got past the zombie slaying antics and thematic fatigue I found a game that explored RPG and Rogue-like elements to its advantage and provided a social commentary that reminded me of the best zombie films. Not everyone will understand it but Dead Rising 2 has depth, variety, challenge and a soul that no amount of infected zombie brain can tarnish.

You can support Adam by buying Dead Rising 2