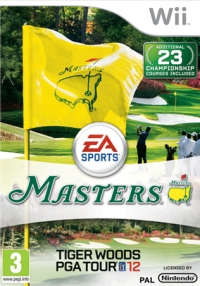 Other GamePeople columnists have reviewed this from their perspective - huh?:
Tired Gamer (360)
Reporting Gamer (PS3) 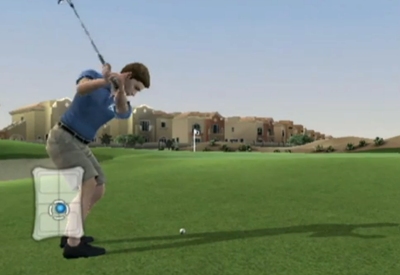 Tiger Woods 12 Wii introduces the Balance Board to its golfing swing. MotionPlus, excellent online play and improved visuals, make the Wii version hard to beat -- even by the PlayStation 3 Move edition.

Sports games recreate a wide variety of real life competitive games. Depending on the sport, these will either have an action or strategy focus. Popular sports games are often released on an annual basis, each year the game receives new player rosters and game improvements.

Tiger Woods 12 manages to squeeze out a few more improvements on Tiger Woods 11's already full rostrum of options. Like last year, MotionPlus allows the game to capture a one-to-one backwards and forwards stroke, but now it adds the Balance board into the swing equation for the first time.

You stand on it to make your shot and the game then determines how your balance effects your stroke. In the Arcade mode you are simply awarded points to unlock power shots. In the Pro mode your balance affects your shot. You must maintain good balance during your swing to achieve full power.

To get the most out of the Balance Board and MotionPlus controls there is a new practice facility that offers a more fully featured range of distances, holes and bunkers than before. New content this year includes the Augusta National Golf Club and the Masters Tournament. Disc and Mini Golf are back again, which both get an online mode for the first time as well as new courses.

The result of theses controls is a game that feels natural and responsive to play. With the inconsistencies resolved and fidelity dialled right up Tiger 12 responds to small improvements in grip, stance and follow through.

The Wii-mote needs to be handled with respect, and feels more like a sporting implement than a plastic controller. Tiger Woods 11 is one game where waggle makes sense - and with MotionPlus there's a fidelity and sense of touch that is almost magical.

The game that wraps around the controls fleshes out the experience with visuals and commentary that speak as powerfully of the game's appreciation of golf as the controls. Spending an evening with friends playing this leaves you with the feeling you have really been playing a game together - rather than wasting time with a videogame.

Add in some of the excellent third party peripherals, like the Bad Chicken club extension and you have a very realistic rendering of the real thing.

As in real life a full round of golf with a few friend can take the best part of three or four hours. You can of course play a front or back nine, but this game is best served by longer sessions. The career mode lets you save midway through a round which helps those who want to jump in and out at opportune moments.

The All Play controls are still present and mean that novice or young players can still enjoy playing Tiger Woods.

Intermediates will appreciate the nailed down consistency and improvements in visuals and atmosphere.

Experts will revel in Tiger Woods 12, and even the most experience will need plenty of time to master the advanced swing options and Balance Board stance tracking. Even with the Move enabled PlayStation 3, the Wii version still feels like a more mature and reliable experience.

You can support David by buying Tiger Woods 12