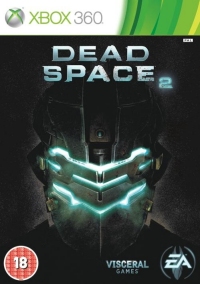 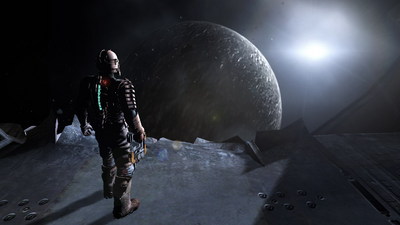 Survival horror games notoriously create tension by constraining the player: tricky controls, widely spaced save points, being unable to move and shoot at the same time, scarce ammo or health items... these are all genre staples that repel as many people as they attract, but they're an established part of the genre nonetheless.

It's a bravado opening, a mad dash into the unknown that makes Alan Wake's night time sprints through the woods seem like... well, a walk in the woods. It ends abruptly and spectacularly, with a battle between Isaac, a Necromorph and a very heavy door closing between them, a sequence that requires much hectic hammering of the A button to free our hero and kill the monster.

This opening sequence ably sets the tone for the whole game, a blockbuster combo of atmospheric chills and frenetic action sequences that neatly intertwines horror and blockbuster in one bleak, thrilling sci-fi package.

When I reviewed the original Dead Space, I said that it was in the same league as Resident Evil 4. Here though, it's even more notable with a real action movie momentum comparable to Capcom's 2005 classic. Like Resi 4, Dead Space 2's rollercoaster pacing creates real exhilaration by mixing quiet tension with sudden, spectacular action. It's a game that delivers surprises as well as shocks.

Like its predecessor, Dead Space 2 is a sci-fi survival horror game where engineer Isaac Clarke battles Necromorphs, human corpses reanimated by the malign influence of an artefact called 'the Marker'. The action is from an over-the-shoulder third person perspective, and combat is based on dismemberment, removing limbs being the secret to successful kills rather than the traditional shots to the head and torso.

This makes for impressively gory combat, as Isaac cleaves off limbs all over the place, sending them spinning into corners of the room. A stomp to the chest is required to make sure a necromorph is really down for the count, and there's a fantastically gross crunch as Isaac slams his bulky work boots through rotting alien flesh.

Although it has plenty of tense exploration of dark, grimy corridors - where would survival horror be without dark, grimy corridors? - Dead Space 2 also comes loaded with considerably more spectacular set-pieces than its predecessor, some of which are all the more effective for their brevity.

One such gear shift comes relatively early in the game, when Isaac boards a train similar to the one used to transport the player between parts of the Ishimura in the first game. It's a perfectly reasonable expectation that this vehicle will fulfil a similar function, moving Isaac between levels.

It's the arrangement of these moments that makes Dead Space 2 addictive, a careful pacing that pulls the player along.

That expectation is quickly shattered by a derailment which sends Isaac tumbling down the entire length of the train, blasting Necromorphs along the way and grabbing handholds to slow his descent. It's a pure action sequence, a shot of adrenaline between the creepier thrills elsewhere, and not the only big set-piece in the game.

These big moments are just one way in which Dead Space 2 feels grander and more varied than the first game. Another is the setting: the Sprawl is a city in space, built on a shard of one of Saturn's moons.

The Sprawl is a considerably more exotic setting than the endless engineering decks of the Ishimura, and its elaborate churches, malls and living quarters are reminiscent of Bioshock's underwater city of Rapture in the best possible way - these are environments that feel lived in and believable, but also strange and impressive.

It's this journey through the Sprawl that gives the game most of its sense of progression, as the narrative itself isn't that strong. I keep using phrases like 'action movie' and 'blockbuster' with good reason, as Dead Space 2's story has the crude simplicity of the best big budget thrill rides: our hero (Isaac) needs to survive against numerous threats (the Necromorphs, along with some trigger happy space police) and preferably destroy a big bad plot device (the Marker).

There's an emotional thread as Isaac (now blessed with vocal chords after his strong silent routine in the first game) comes to terms with the death of his girlfriend through the literal-minded plot device of him talking to her ghost, but otherwise it's more or less a case of 'kill moving bad things blow up big bad thing'.

Dead Space 2's story is a series of obstacles between Isaac and his inevitable confrontation with the Marker.

Barring the odd minor twist as Isaac deals with various non-player characters on his journey, Dead Space 2's story is a series of obstacles between Isaac and his inevitable confrontation with the Marker.

That this works is a testament to how interesting and spectacular those obstacles are: although the laboratories and industrial spaces of later levels can't match the more domestic or gothic settings early on, Dead Space 2's looping geography and varied locales create a real sense of having experienced something in the course of the game, of having seen some sights between the first and last cut scene.

It's a game full of memorable moments, from perilous journeys out into space to the very specific, very gory death animations as Isaac falls foul of the many hazards littering the environment. While huge lasers slicing Isaac in half or giant pistons crushing his body are bad enough, late in the game there are a couple of exceptionally nasty scenarios that'll give even hardened horror games a twinge of sympathy when they go wrong, scenes notable for their tight, painful focus rather than splashy scale.

It's the arrangement of these moments that makes Dead Space 2 addictive, a careful pacing that pulls the player along and makes the flimsy narrative seem stronger than it really is. This is a very well balanced game, far more so than the first Dead Space, one which very carefully alternates its stretches of quiet tension and bursts of action or spectacle, dropping in checkpoints and cut scenes in exactly the right spots to maintain interest.

A genuine epic then, albeit a simple minded one when it comes to plot.

This careful pacing ensures that Dead Space 2 rarely seems like a slog, and that after every save station it's worth exploring a little bit further, peeking around the next corner to see what interesting environment comes next. Although there's the very occasional tiresome moment, and there's limited variation in the (well balanced) selection of necromorph types Isaac has to fend off, that desire to explore further is usually richly rewarded.

A genuine epic then, albeit a simple minded one when it comes to plot. While I've been enjoying a lot of downloadable indie titles lately, Dead Space 2 shows that there's still merit in a big budget HD-friendly game, in a bombastic sci-fi thrill ride with epic vistas and explosive action. The game looks great, with a real sense of space to the Sprawl and truly atmospheric (no pun intended) environments. Character animation is superb, and the dialogue and voice performances are strong. The game feels dramatically directed, while never impeding player control.

Dead Space 2 is big, bigger than the first game in the series, and better for it. It absolutely wont win any awards for subtlety or nuance, but it's one hell of a thrilling ride.

You can support Mark by buying Dead Space 2