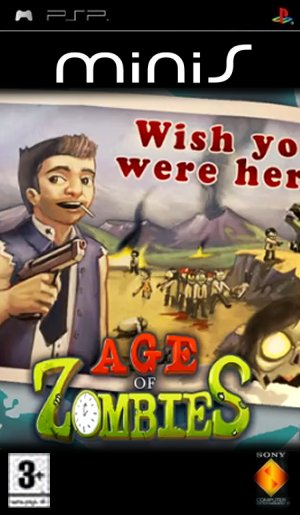 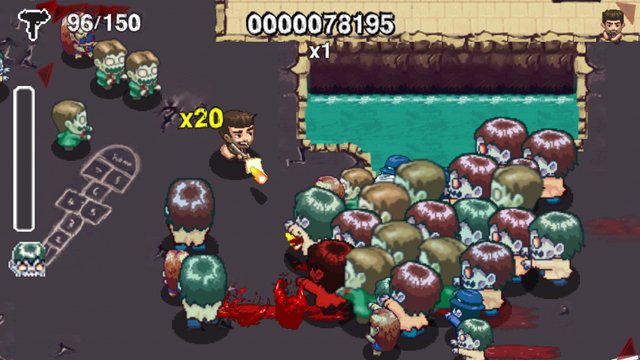 Age of Zombies PSP brings twin stick shooting with plodding zombies and is up against some stiff competition. Going up against the likes of Super Stardust Portable though is giving yourself a fairly high standard to be judged against.

To refresh wholesale zombie slaughter, Age of Zombies adds time travel and takes you through some unusual environments. These include a prehistoric land full of cavemen-zombies and ancient Egypt where you tackle both zombies and mummies. Each location has a boss at the end - my favourite being the undead Tyrannosaurus, who charges about the screen but is essentially harmless.

When I picked this game up, I wasn't really feeling the vibe, thinking it was just another generic top down shooter. But the art style, humour and desire to progress and see the next time zone just about elevates it to something you should probably check out. The lack of online leader boards and relatively short play time obviously hurts the game, but that’s to be expected on a Minis title.

Weapons, which are periodically dropped around each level, include the standard selection boomsticks and you'll probably try and grab yourself a shotgun as often as possible. I can't remember what my zombie survival guide says, but the shotgun nearly always seems to be a satisfactory way to crowd control the hoards. Secondary weapons such as grenades give you greater levels of destruction, but can prove more difficult to lob where you need them in a pinch.

The standard PSP surrogate twin-stick convention of using the analogue nub for movement and the face buttons to fire your weapons is adopted here.

The standard PSP surrogate twin-stick convention of using the analogue nub for movement and the face buttons to fire your weapons is adopted here. This gives you just eight directions to shoot in, but it works well enough here. The left shoulder button takes care of your secondary weapons which launch in whatever direction you're facing.

I found the best tactic was to guide the zombies into my cone of fire, whilst keeping an eye out for new spawn points. I developed that twin stick habit of steady constant movement, so as to avoid being overwhelmed in any one area. Age of Zombies then tries to tempt you out of these safe strategies with goodies such as the mini-gun - but usually it's best to resist.

Being a portable game, it's good to be able to continue from the level you last died in, meaning the casual gamer has a greater chance of seeing all of the levels. This encourages you to play a level and then take a break. Before you know it thought you'll find yourself switching back on for another round.

Halfbrick Studios are also responsible for Echoes and Blast Off, both great examples of how to make small easy to play PSP Minis titles. Age of Zombies PSP continues that trend of easy to pick up games for not much money. I played it enough to develop a very sore thumb from extended nub rub, so it can't be all that bad!


You can support Simon by buying Minis: Age of Zombies