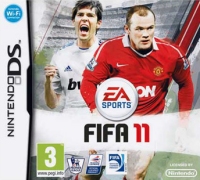 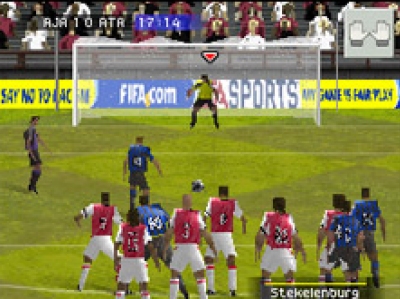 FIFA 11 DS is a full featured miniaturisation of the big ticket version. On the go link-up game play compensates for predictable opponents and pixilated visuals. A full football game in my pocket is enough incentive to keep me going till the 3DS arrives.

I like playing games on the go so I've always kind of ruled out football. I just didn't think it would be good enough on the DS and I've not been able to afford a PSP. But picking up the new FIFA 11 DS game I was surprised how much proper footballing fun I had on it with my mates .

Since last time I picked up one of these games the graphics have obviously come on a lot. It really looks like a real FIFA game with players - although not really that recognizable as individuals - looking like real people.

There is a new mode in FIFA 11 that I really liked - Ultimate Team lets you build your squad by collecting packs of cards you buy in the game. It felt a bit like my old obsession with Pannini football stickers and Magic the Gathering cards.

Each new set of cards you buy enables you to change up your team with more effective personnel. It's clever because by limited the players you have access to, when you get a new set it feels really exciting. I also got into trading player cards with my friends via the wireless connection - and that isn't something we've done since being in the juniors.

It's clever because by limited the players you have access to, when you get a new set it feels really exciting.

There's also a Manager mode where you can take your local club from obscurity to stardom in just a few seasons - although my progression always seemed to be in the opposite direction. The Be a Pro mode was a little like the 11 player approach in the 360 game where each person plays in a particular position, although here only one player can play at a time.

I spent the most time in working through a season with a particular club. There was enough of the atmosphere and game play of the big console versions to get me well into it on the bus or during trips to see my grandparents.

After a while you do start to learn the computer tactics pretty well. Although this can help you win if you plan things right, it's actually more of a pain. Playing FIFA 11 against the computer felt a bit too repetitive for me. They always seemed to use the same moves, rather than reacting like real players.

It is the ideal way to pass the time on the bus to school, or morning breaks and lunchtimes.

This meant I ended up gravitating towards games played against my mates. Luckily a few of us have the game ourselves as you can't use the DS's game sharing feature. Once setup like this though, it is the ideal way to pass the time on the bus to school, or morning breaks and lunchtimes.

In fact having this little portable football world in my pocket all the time meant this is probably the version of FIFA I've played the most. While my dad is well into the 360 version and even my mum is having a crack at the Wii game with my younger brother, I'm happy to stick with the DS game for sheer portability.

With the 3DS coming out next year I reckon that will be my perfect version of FIFA, but until then FIFA 11 DS is keeping me and my mates pretty well entertained.

You can support Rowan by buying FIFA 11