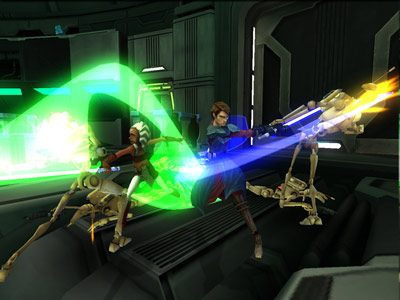 Living out the adventures portrayed in The Clone Wars animated series has been faithfully realised in Republic Heroes. Here you assume the mantle of familiar faces like Anakin Skywalker and Captain Rex in a brand new story that bridges the gap between series one and two. This excellent adventure follows the pursuit of a mysterious assassin and sees you learning more about Cad Bane and the Skakoen villain Kul Teska.

The choice of playable characters is also impressive with eight Jedi available including Obi-Wan Kenobi, Ahsoka Tano, Mace Windu and Kit Fisto. Playing as a Jedi means the gameplay is significantly different to that of the Clone Trooper campaign. Using the lightsaber is satisfying, especially when facing larger enemies as you can participate in 'droidjacking,' allowing you to take control of a droid's weapons system and turn its firepower against others. This leads to some epic and fun battles throughout the game, especially when you combine the Force powers into the combat.

There's a slight puzzle aspect to playing as a Jedi as well, with environmental puzzles to solve that are accessible to everyone yet still quite satisfying to solve. It's the accessibility that is the key here. Everything from the control system to the level design is laid out in a way that's easy to dive into now matter what you're skill level is. The beauty to these Star Wars games is how anybody can play them and you never get stuck on a puzzle or in a combat situation that's too difficult to progress.

For a different approach you can choose to play the game as a Clone Trooper. Here the game turns into more of a twin-stick shooter with movement controlled by the left analogue stick and firing determined by the right stick. This is a refreshing change to the Jedi gameplay and effectively means there's two games packed into this release. Whereas Jedi rely on Force powers and their Lightsaber skills, Clone Troopers are all about the guns and grenades. You'll be able to use a variety of blasters, including heavier weapons such as miniguns and rocket launchers. This all leads to an explosive experience and a great deal of fun for everyone playing

Parents will be pleased to hear that there's a ton of replay value in the game, with the ability to compete against the other player for in-level challenges. These rewards and points can then be spent to uprgrade your character and unlock bonus items. There's also an upgrade system incorporated as well - with the collection of Force Orbs that are scattered over the levels unlocking various weapon improvements and Force buffs.

What gave me the best experience of this game was the co-op mode. It's obvious that it was developed with that style of play in mind, just like the Lego Star Wars and Lego Indiana Jones games were. Playing this with my son or with another Star Wars nut made for the best moments. Fighting alongside each other, helping each other out and enjoying the satisfying gameplay all made this a great videogame experience.

The connection to the TV Series is an awesome tie-in and gives Star Wars The Clone Wars: Republic Heroes a family-friendly feel that will bring new and old fans of the universe together. With the brand-new storyline and the impressive variety of gameplay, Republic Heroes is an excellent way to fight the Separatists and restore balance to galaxy once again.

You can support Jan by buying Star Wars The Clone Wars: Republic Heroes