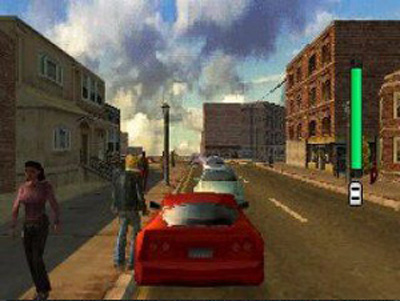 Cop: The Recruit for the Nintendo DS lets you assume the role of ex-street racer Dan Miles as he embarks on a quest to clean up the streets and bring justice to a tough New York. C.O.P.: The Recruit offers an open-world environment you'll get to traverse over six square miles of city in a technically impressive DS game that sees you embarking on a dramatic story with shoot-outs, car chases and dangerous undercover operations.

The immediate comparison that you’ll make when playing Cop: The Recruit for the Nintendo DS is Grand Theft Auto and it's to the credit of Cop: The Recruit that it matches that epic game in nearly every way possible. Playing as Dan Miles, a former underground street racer and new recruit in the Criminal Overturn Program (COP), the game pushes you straight into a dramatic storyline that could easily have been crafted from the stable of GTA. It's hard not to overstate how surprising the story is and you'll be wrapped up in the drama as it takes you on a ride through an exciting and thrilling widespread conspiracy.

Even moving around the city is impressive and it's clear that the effort gone in to replicating a vibrant New York City, with sixty missions and over twenty hours of gameplay, is an achievement worth celebrating. There are no load screens and the action, whether its on-foot pursuits or intense car chases, is always smooth and detailed. Pedestrians, rush-hour cars and boats are all in the game, doing their own thing whilst you continue on with your missions and this attention to detail helps to build an impressive atmosphere that pulls you further into the game.

The missions themselves offer a good variety and make full use of the DS hardware, with touchscreen controls in constant use and the unique method of planning and launching a SWAT assault through the DS microphone giving Cop: The Recruit some unique gameplay mechanics unlike any other games. Where COP: The Recruit also differs is in its way of targeting and controlling the combat. During the shooting portions of the game you control your character by using the D-pad whilst using the stylus to aim and shoot. It's a difficult skill to accomplish at first, especially if you’ve been used to controlling 3rd person games in a different way, but after a while it becomes a fun and easy way to gun the criminals down.

Unusually it also offers some stealth elements into its gameplay and these sections highlight how far outside of the box the designers were thinking when it came to the missions and the environments of this game. Cop: The Recruit also treats its violence in a far more conservative way than its inspiration - the violent GTA games - would depict. Pedestrians jump out of the way if you drive along the sidewalk and enemies fade away after being shot. Far from being a cop-out, this means the game is suitable for a much wider audience than the games it evokes and has just as impactful a story without the gratuitous violence.

In terms of a sheer technical achievement, Cop: The Recruit is an amazing game. The lack of any load screens and the way the entire city can be accessed by just driving or walking anywhere you wish makes this an incredible experience you can hold in your hand. It excels with some of its unique mission types and I found the Metal Gear-like stealth sections to be surprisingly enjoyable. But my biggest thrill came with the planning of the SWAT raids which made use of the DS touchscreen and the microphone. Admittedly this isn’t a good mechanic if you're on the bus, but placing your SWAT guys strategically by using the stylus and lining them all up for the right entry points before bellowing 'go, go, go!' into the microphone made for some truly immersive gaming moments.

To say this is simply a GTA clone would be doing both games a terrible disservice, there are aspects of Cop: The Recruit that will never be quite as good as Chinatown Wars, but it also excels in other areas. As an open-world crime thriller it succeeds in putting a large, open-world environment into the palm of your hand. It has some superb shooting mechanics and makes successful use of the DS hardware more than any other action game on the platform. This is a thrilling ride through a wonderful story and a technical achievement that any fan of thrilling games should check out now.

You can support Jan by buying Cop: The Recruit