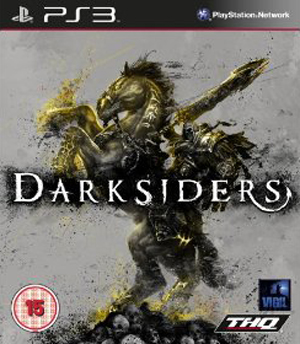 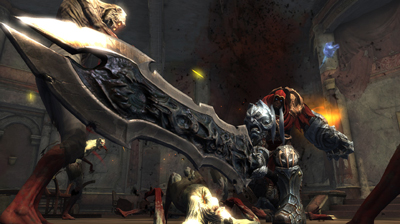 Inspired by the themes and mythology of the apocalypse and armageddon detailed in the Book of Revelation, Darksiders for the PS3 and Xbox 360 is a spectacular game depicting the battle between heaven and hell. This third person action/adventure experience sees you taking on the role of 'War', one of the Four Horsemen of the Apocalypse, and battle through vengeful angels and evil demons in order to discover the truth behind this celestial conflict. Darksiders gives you a vast variety of weapons to spectacularly take the fight to the hordes of hell and with a mix of fast-paced gameplay and level exploration; this is a biblical experience you won't want to miss.

As an antithesis to recent games, which have started to introduce a morality system into their gameplay and story, Darksiders gleefully ignores this element of choice and has you playing the part of 'War' one of the Four Horsemen of the Apocalypse from the Book of Revelation. The setup of the game sees you and your other three cohorts prematurely bringing about the Apocalypse, sending the world into chaos and, as a consequence, having you stripped of your powers and abilities. War is then sent back to Earth to rectify the problem and find out how he and his fellow horsemen were misled and betrayed.

It's an interesting setup and one that allows for a lot of spectacular imagery as you battle against demons and angelic beings on the surface of the Earth. The absence of any morality system means that you're free to dispatch whatever you like in order to uncover the truth. For once in a game you aren't trying to save humanity at all - you're just trying to find out what went wrong in the beginning. It's quite refreshing to play a game taking this path and it means that the emphasis of the experience is all about the action and spectacular combat, rather than any deep and meaningful narrative.

The combat itself is visually impressive. You have a variety of weapons at your disposal ranging from a massive sword detailed in the Book of Revelation to more modern ballistic firearms. You can also strip fallen enemies of their weapons and these have a great variety of status effects like electrical bolt attacks that you can take full advantage of. At a certain point you'll be reunited with your horse, Ruin, and this gives War some new abilities like the option of trampling enemies and reaching previously inaccessible area of the map.

This highlights the slightly open-world non-linear design of the game. At any point you can backtrack to earlier areas and find new sections that you may have missed or been unable to access. It also means you can go back and find more treasure chests, bonus life points and weapons - essential for the latter parts of the game when combat becomes a bit more intense and challenging.

The greatest aspect to this game is its atmosphere. Set in a devastated version of Earth amid a raging war between heaven and hell means there are battles going on all around you throughout the levels. Some of these are purely atmospheric backdrops, but I found several were actually interactive, leading to a very strong feeling of chaos and the sense I was in the middle of deadly battlefield.

Darksiders for the Xbox 360 and PS3 feels very much like a biblical version of God of War or Bayonetta with its combat style and sense of impressive scale. It doesn't quite live up to those lofty heights thanks to its less-than compelling storyline and while the decision to eschew any morality system works well for the combat, it means the game is purely reliant on those mechanics to give the experience longevity. It's good in short bursts but don’t expect a storyline as gripping as God of War or Heavenly Sword.

With the inspiration coming from the Book of Revelation, Darksiders for the PlayStation 3 and Xbox 360 is nothing if not a visual feast of exuberance and scale. There's always the sense that you're fighting a battle of biblical proportions and despite the story's weak nature, the impressive enemies and spectacular combat keep the experience fresh and interesting throughout.

You can support Jan by buying Darksiders