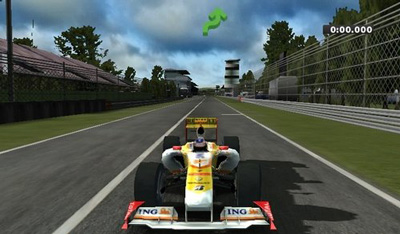 Formula One returns to the gaming consoles with this new Sony PSP title, Formula 1 2009. Featuring all the official drivers, teams and circuits from the 2009 FIA season, this fully licensed game breaks new ground with its authentic look and feel. With exciting ad hoc co-op and multiplayer features as well as a comprehensive single-player mode, Formula 1 2009 immerses players in the most exciting motorsport on the planet.

With nearly four years passing since the last Formula One game on Sony's PSP, Formula 1 2009 puts players back in the cockpit of the most advanced cars on the planet and promises to recreate the exciting season of the 2009 Championship season.

It doesn't fail to impress with its vast array of options and content right from the off - there's all the teams and drivers from the 2009 season and seventeen tracks which includes the new Yas Marina track and this level of detail is essential for creating an authentic simulation. The game modes also offer a wide variety of challenges; some giving brief ten minutes play sessions whilst others offer a time-consuming package that will keep you glued to the PSP for many, many hours.

The career mode is what takes up the most time and sees you signing up with a team, aiming to meet their season demands and moving your way into the Formula One environment over three years. This isn't just a simple process of ploughing your way through successive races - you'll get to experience a pretty accurate recreation of the sport with training sessions, qualifying sessions and the opportunity to understand and tweak your car.

This is where the real hardcore elements of Formula One racing come into their own as you'll be able to adjust tyre types, geometry, suspension settings, downforce etc. all in pursuit of shaving 1/100th off your lap times. But these technical details are optional and you can easily ignore the intricacies of Formula One racing and still be successful in building an impressive career.

For something a little different, Challenge mode offers a unique take on the racing genre with over seventy mini-games that involve set challenges - like overtaking a number of cars within a time limit, setting fastest laps and clearing checkpoints within a certain timescale. These challenges also unlock a scenario-based event after you complete a certain number. These events ask you to get through a particularly taxing situation, like finishing a race in wet conditions whilst on dry tyres for example, and add even more challenge to this section of the game.

Out of the two modes, Career and Challenge, it’s hard to say which is best. I love my authentic Formula One experience and this PSP game delivers an exceptional and well-rounded version of the Formula One season - even down to the technical nuts and bolts stuff that I adore. But the Challenge mode is addictive and compulsive to play even after completing all the challenges. I found myself coming back time and again to try and beat my own scores or old times as I became used to the controls and physics. The option to play a full-length race in the career mode was also a plus point - not just because I love the idea of being authentic, but because Formula 1 2009 has the controls and feel of the PSP down to an art that makes it an enjoyable experience.

It's been a long time since Formula One graced the console scene in a fully licensed way, but Formula 1 2009 for the PlayStation Portable has all the features to make up for the four years of racing drought. The comprehensive career mode and the amazingly addictive challenges will keep fans of the racing genre stuck to this game for many months to come.

You can support Jan by buying Formula 1 2009