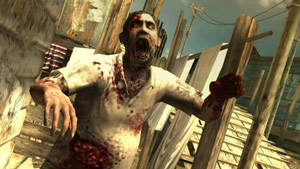 The story of Resident Evil: The Darkside Chronicles on the Nintendo Wii takes the series back to Resident Evil 2 where the popular characters Leon S. Kennedy and Claire Redfield are battling the infected citizens of Raccoon City. The on-rails gameplay from Umbrella Chronicles, the previous game in the series returns and offers a fully immersive shooting experience with the Wii-mote. With additional levels taken from Resident Evil: Code Veronica and new content created exclusively for this game, The Darkside Chronicles continues the excellent experience of playing the Resident Evil games on the Wii console.

Retaining the same on-rails gameplay from the Umbrella Chronicles game on the Wii, Resident Evil Darkside Chronicles keeps that same first-person survival horror vibe going with some impressive shooting and interactive pathways. This experience is unique to the Wii and just as in the previous Chronicles releases it gives you the chance to re-live some of the classic moments from the Resident Evil franchise and introduces new players to this unique action-horror experience.

Playing as Leon Kennedy or Claire Redfield the story takes you back to Raccoon City from Resident Evil 2 and lets you relive those experiences with the unique control system of the Wii. Taking in the hidden laboratory from Resident Evil Code Veronica, the game also fills in the missing parts of the story from the previous Chronicles game and fleshes out the world even more. This is especially important for any true Resident Evil fan as archive items such as characters, enemies, documents and movies can be found throughout the game as collectibles.

But it's the addition of co-operative play that makes the biggest impact in the Resident Evil: The Darkside Chronicles on the Wii. Inviting friends and family around to experience the game in two-player co-op gives Resident Evil Darkside Chronicles a level of immersion that the previous games lacked. The dynamic difficulty system works wonders in keeping experienced players challenged whilst also allowing new players to get into the game easily and have fun. Even in single player there's an AI controlled character to help you out, just as in the latest Resident Evil 5 game for PS3 and Xbox 360 consoles.

There's also the inclusion of an 'evade' system which builds up the tension and immersion even more. This utilises the Wii remote to dodge attacks and gain a tactical advantage when facing multiple foes. The biggest aspect that helps to build up an atmosphere is the camera. Resident Evil Darkside Chronicles uses a camera system which is designed to give you the impression of actually being a character in the game. The little shakes and freezes that occur at the appropriate moment make a huge difference in how the game conveys its sense of place and reality. The same aspect is with the environment and how it reacts to your shooting. Objects fall apart, fruit splits, and doors shatter when shot - leading to an awesome feeling as you go on this impressive and horrifying journey back through the Resident Evil series history.

The Resident Evil games have always had a place in my gaming heart and I must confess that I expected the worst when I heard that a series of Nintendo Wii games were being developed. But the level of immersion, from Resident Evil 4 on the Wii to the Chronicles series of games, is amazingly effective. Having a real-life partner beside me whilst I took on enemies with the Wii remote was such a fun experience that it dragged me in deeper into the game than my favourite, Resident Evil 3.

The turning point in this particular game was the South America level. This follows Resident Evil 5's trick of being horrifying in broad daylight and succeeds in exactly the same way. The bleached visuals and the stark nature of being pursued by such grotesque human and animal infected made the horror all the more effective. Both I and my friend were breathless after completing this section and its exhilarating nature just showed what the Wii could do with its incredible motion controls and visuals.

With its excellent control system and new content, Resident Evil Darkside Chronicles for the Wii offers an amazing co-op journey that's full of action, suspense and excitement. The way it brings together the elements of story, impressive visuals, immersive controls and reveals new content form the Resident Evil series make it an essential game for any fan of the franchise.

You can support Jan by buying Resident Evil Darkside Chronicles