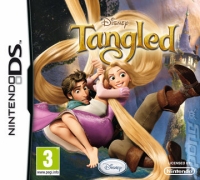 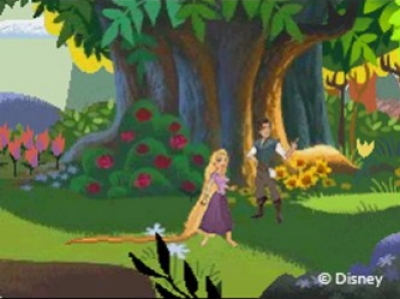 Tangled DS does its story really well, rather than trying to add too much extra stuff. It was a little short, but I really enjoyed playing it and it felt like a real adventure.

Tangled DS is based on the new Disney film about Rapunzel. I'd played Tangled (Wii) as well Tangled (Mobigo) and Tangled (VReader) so I knew the story pretty well already. I thought the DS game might just be minigames rather than a proper game, but it is actually quite like the Wii one.

On the DS the game uses the same paintings as the Wii to tell the story, although these are just snippets and without the person speaking over the top - you have to read it. It reminded me how much I loved watching the Tangled story on the Wii before and after each level.

The main game is an adventure. You can't go anywhere you want like on the Wii, and you can only play Rapunzel not Flynn because it's only one player. But I don't think that matters as I really got into the story.

I really got into the story.

To move around you use the D-pad but to collect stuff you have to tap on it - you can't just walk over it. You can also tap on different things in the background to make flowers grow and find the things you need to in the story.

It took me about five hours to play through the whole story which is quicker than the Wii game, but not bad for the DS. Once I had finished I didn't really feel like playing it again as it would be the same story.

Some bits I really liked are the different challenges you get set in the game. Sometimes you need to brush Rapunzel's hair to get the leaves out, or steer her around the screen collecting lanterns - my dad said this was like an old game he used to play when he was young called Worm.

There isn't a multiplayer mode, which is why I said you couldn't play Flynn, but I don't think this matters too much. It is better that they made the game as good as they could rather than trying to add in extra stuff like that and more minigames.

Tangled is one of the DS games I've played the most.

Although the Wii version is still my favourite because I can play with my brother and it has the really nice story animations, Tangled is one of the DS games I've played the most. A lot of games I get bored of and don't finish, but it was so good I played it right to the end in the first day.

I will probably play it again in a while, but not straight away. Maybe if there were more different things to collect I'd play it sooner. But I think it would be pretty much the same game each time you play it.

You can support Ben by buying Tangled