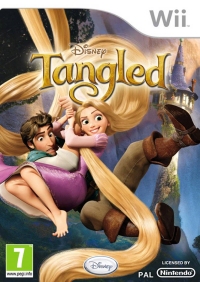 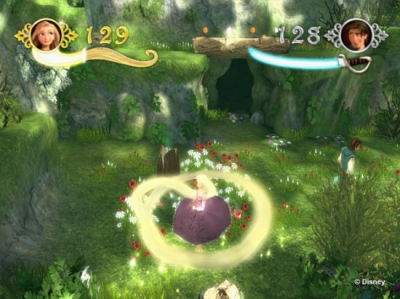 Tangled Wii is another well told accessible platform game from Disney for two players of any age. They have got into a habit of not adhering to the usual movie cash-in rules, and long may it continue.

The kids used to groan if I came home with a movie tie-in game. They expect, quite rightly, these to be the product of a marketing machine rather than any desire to create something interesting, engaging or playful. Well, they would put it more directly than that, "This is rubbish Dad", but I know what they mean.

Disney have been bucking this trend though. A string of original and well thought through games using popular movie franchises have both surprised and intrigued my family.

Epic Mickey (Wii) seemed to get a bad press elsewhere, but we loved its exploration and story telling. What's more, Alice in Wonderland (DS) was as unique and endearing as any original game we've played. These sit alongside more hardcore games like Split/Second (360) and Pure (360)< and round off Disney's impressive recent track record.

Tangled continues this in impressive style. The game, as I have alluded, is spun off from the recent Disney film about Rapunzel that takes the fairy tale in a more Hollywood direction. Although I'm not all that keen on the girl-power meets skinny princess motif as a role model for my daughter, the setup offers some interesting gameplay opportunities.

Everything is kept simple enough for my eldest two (five and seven) to enjoy without help from me.

It's a platform adventure game not a million miles away from the likes of Lego Star Wars et al. One or two players work their way through the world to reunite the princess with her real parents in the royal palace. Along the way there are plenty of puzzles, brawls and treasures to be found.

Like Epic Mickey, both Tangled (Wii) and Tangled (DS) are made specifically for each platform. In fact, there isn't a PS3 or 360 version of the game at all. This all bodes very well for the time and attention taken to extract the maximum out of Nintendo's diminutive console.

Everything is kept simple enough for my eldest two (five and seven) to enjoy without help from me. What's more the second player can jump in at any point, and equally take a break at any time too. The computer takes over control should they get distracted for too long.

The best feature, as far as my two independent offspring seem to be concerned, is that they can each go their own way. The screen splits in two if they are not in the same place, in a clever feature seen in the more recent Lego games.

Where Disney really leverage its muscle is in the story telling. The cut scenes are hand drawn and, although not as impactful as the exquisite work in Epic Mickey, do a sound job of added a little narrative gloss to the adventure.

The only down side for younger players is that the save points are few and far between. In fact, you have to finish one area completely before the game saves. If you quit you aren't given a warning but soon discover any progress in the current level is lost.

The kids seem to think that the film was created as a spin-off to the videogame rather than the other way around.

There are also some tricky jumps and puzzles that we got stuck on for a while. Younger players can easily miss the crucial clues for solving a particular scenario and waste time going round in circles. Although that said, my two didn't seem to mind this too much and eventually stumbled on the right tactic.

The two characters you play Rapunzel and Flynn are the perfect boy-girl stereotypes. Some may protest about this, but they do seem to connect with my oldest two's desires. My daughter was taken by the princess's super long hair that trails around behind her, and my son enjoyed bashing through barrels. Perhaps I should get them to switch for their next play through?

That not withstanding, Tangled is another strong example of a movie tie-in that works on its own merits. In fact, we played this before seeing the film. To hear them talking, the kids seem to think that the film was created as a spin-off to the videogame rather than the other way around. In my book this is a real success.

You can support Andy by buying Tangled