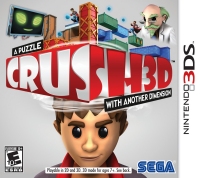 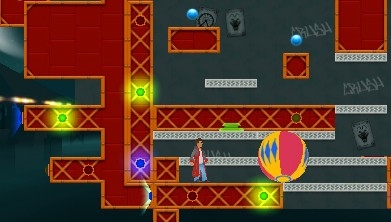 Crush 3D delays its third dimension gameplay until next year. The reinvention still looks interesting on the 3DS, and hopefully extra time will mean a more tailored experience.

If you missed it on the PSP, Crush 3D is the unique platform game that enables you to change perspective from 2D to 3D to solve geographical puzzles, a little like Echochrome.

The 3DS title promises to extend gameplay from the original with a range of 3D features exclusive to Nintendo's new handheld.

Crush 3D will now be released on 3DS on February 17th.

Crush3D is a puzzle platform game where you manipulate 2D and 3D space to solve problems and attack enemies.

Crush3D is an update to the award-winning Crush PSP title on the 3DS. It promises to work well on the new Nintendo handheld through the touch screen and use of its 3D display.

The risk here is that it is essentially the same as the PSP game. Will marriage of system and game play will offer enough to attract new players or bring back existing fans?

At first glance Crush3D looks like a simple 2D platform game. That is until a high obstacle is reached, then at the press of a button the world jumps to 3D. Like Echoshift (PSP) and Lost In Shadow (Wii) this new perspective allows you to circumvent obstacles, as well as revealing new world elements. Once finished in 3D the world can be oriented to a desired direction and crushed back down into 2D, enabling you to be on the other side of scenery or even moving on a perpendicular plane to where you started.

This crushing and popping dynamic need not only act as a way to navigate the world, it can also be used offensively see off enemies that may wish you harm. For example a platform with a hole in the middle in 3D could be squashed down to a solid 2D surface, luring and aggressor forward. Once positioned over where the hole would be popping back to 3D will see the abyss magically reappear and the foe fall to their death.

Bolstering the 3DS incarnation are new levels, characters and a hint system. This may not be enough to tempt back players of the original, but for 3DS owners who have never experienced Crush this could prove an interesting title that makes good use of the systems 3D abilities.

Crush3D will be released for 3DS this September.

You can support Paul by buying Crush3D