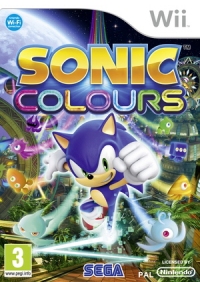 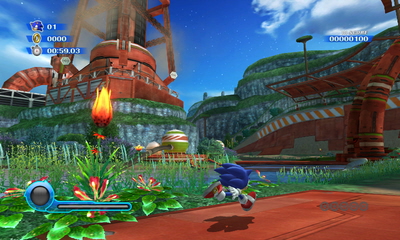 Sonic Colours is a well overdue return to form for a series I'd loved as a child but had all but lost faith in since coming back to gaming.

I've been an atheist since the moment I found out there was more than one god. As a way to pass the time -- you know, since I have no god to worship -- I've taken to online religious debate forums.

The only thing theists seem to have common ground on is a desire to pick holes in atheism. Galling statements I've seen include 'atheism is a religion too' or 'you're just mad at God!' No doubt theists are just as frustrated with atheists and both sides are left scratching their heads.

If, after weeks of debate, a theist abruptly declared, "Ah. That's why you're an atheist. I get it now," the relief would be as unexpected, if not as emphatic, as what I felt upon completing Sonic Colours.

Finally, SEGA has had its light bulb moment. Not quite up to the heavenly reaches of the 90s trilogy, but Sonic Colours is so much closer than any of the other intervening Sonic titles.

Colours endears because it does much of what I loved about old-school Sonic.

Colours endears because it does much of what I loved about old-school Sonic while being distinctive. Levels have multiple routes to discover that are easy to learn but difficult to master - something underlined by my end of level scores.

More importantly though, Colours lives up to its name. It is SEGA in unmistakable garish full flight - the stunning Starlight Carnival levels are a work of art in themselves. Watching Sonic rush over a shimmering indigo platform forming underneath his scurrying feet against the backdrop of black, starry space is nothing short of a delight. It's imaginative, vivid, and downright cool. It feels like Sonic should feel.

I enjoyed playing a Sonic game and simply revelling in the simple pleasure of holding down right on D-pad and timing pushes of the A button. In an odd way, the annals of bad Sonic games have been hanging over me in my adulthood, almost like a humiliating tattoo on my gaming skin.

Nothing feels more concerning than giving up time to a bad Sonic game.

With the coldness of grown-up reality on my shoulder, indeed as a grown man sometimes playing games on his own in a big, lonely room, nothing feels more concerning than giving up time to a bad Sonic game. Sonic Colours sets this straight.

Sonic Colours is a reminder that faith can be a good thing, even if it's nonsensical. It's also a reminder that the dogma of adulthood, with its bills and forms to fill, shouldn't make you feel like running from left to right and jumping on stuff is a waste of time.

You can support Sinan by buying Sonic Colours