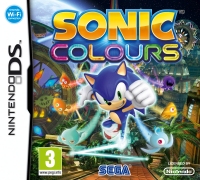 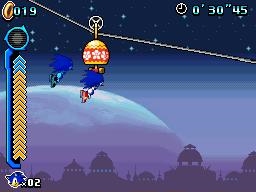 Sonic Colours DS is only 2D, but its blistering pace and reaction game play finally got me and my friends into Sonic. I was surprised how addictive it was, not having played the old games before.

I don't remember the old Sonic games. Sorry, but they were before my time. Of course I've heard of how great they were, but the versions I've played always seem to be more confusing than fun.

Sonic Colours DS made all the same promises I'd heard before, and if it hadn't been for a lack of games on a long coach trip I don't think I would have even given it a try. I'm glad I did though, and it wasn't long before my friends were all demanding we pass the DS round to each take turns.

It looks more like the old games than the newer Sonic games I've on the Wii. And it's fast. In fact fast is an understatement. Being used to the more considered platforming of Mario and Metroid I wasn't really ready for this.

Basically each level is like a speed run where you have to pretty much rely on muscle memory and reactions to get to the end as soon as possible. At first this is bewildering, but after a while you start to see patterns in how things are laid out.

Although it's quite predictable though, it doesn't feel too repetitive. That's probably because it's going so fast you don't have time to get bored. The familiar spikes, loops, and moving platforms are joined by watersides, giant dinosaurs and underwater worlds that all add to the excitement.

It wasn't long before my friends were all demanding we pass the DS round to each take turns.

As you work through the different worlds gives you another colour to use. And each colour lets you transforming into something with special powers - rockets, laser and the like. Each level is designed with these special powers in mind, meaning that sometimes you need to go back to a previous level to use you newly gained colour to access new areas.

On the coach we really got into the collecting challenges where you are dumped in a particular level and have to collect all the tokens in an allotted time - it got quite competitive. There's also a good multiplayer mode where two people compete to see who can reach the end of a level first. We didn't discover it until our batteries had almost died but I think we'd have mainly played this on the journey had we known it was there.

Each level is like a speed run where you have to rely on muscle memory and reactions to get to the end.

Playing through the game back home I found it a little frustrating at times. Some levels just suddenly get hard for no reason - while others are strangely easy. I often run out of lives quite suddenly and had to start the level from the beginning. I know that's how games used to work back on the Megadrive but this 2010, we need checkpoints!

Sonic Colours DS has well and truly got me into the series as a whole. I'm even going to have a go on the Wii game when I can get some time on the family console - Just Dance 2 is always on at the moment.

You can support Rowan by buying Sonic Colours