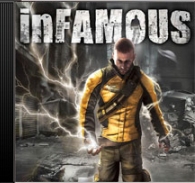 Other GamePeople columnists have reviewed this from their perspective - huh?:
Soulful Gamer (PS3)
Mousey Gamer (PS3)

The InFamous soundtrack struggles to rise above its loud atmospheric nature and is initially a harsh listen. But push past the brash beats and random percussion and you'll find a pulsating work of impressive hues. This is a unique and ultimately rewarding soundtrack.

My initial thoughts of the Infamous soundtrack were not positive. Random beats, fragmented melodies and a lack of recognisable themes made listening awkward and uncomfortable. Only after repeated listens did the real quality and individual nature of the soundtrack reveal itself and it has quickly become one of my favourites.

It's not a great start though. The first four tracks grind and beat on your ears with their discordant percussion and sample-heavy madness. This works fine in the game, but more consideration of the listen is needed if the music is to work alone. It's the kind of soundtrack that will gladly give you a headache with its pseudo-drum 'n bass setup.

Within Infamous' environments the music fits perfectly. The ruined and over-wrought city needs a soundtrack to match its decayed and chaotic state and the beats of Rabble Rouser and Meet The Reapers compliment the playing experience.

Even though I never enjoyed Infamous for its story and pretentious attitude, the soundtrack works wonders in setting a unique atmosphere

Even though I didn't enjoy Infamous for its story and pretentious attitude, the soundtrack establishes a unique atmosphere and avoids the generic setting of the game's open-world, New York-esque sandbox.

The ambient tracks that play in the background as you scale the huge Junk Tower during the mid-point of the game, remain a thrilling memory. Thanks to the mix of rhythmic beats, sampled piano and the FOLEY sound design, this was the most dramatic part of the game.

I felt as if waiting to relax and exhale until Dinner With Sasha, the 7th track on the album. Here, the rhythm of the music comes together to create an sense of the epic that then crumbles into some quieter emotive moments.

This mix of loud, rhythmic and mellow tracks makes InFamous one of the most eclectic soundtracks I've listened to.

But to get there, you have to traverse tracks like Secrets Revealed - a mash-up of drums, percussion and samples. But here too there are interesting overtones, evoking a modern revisiting of the old west as Greg Edmonson often riffed in the Firefly and Uncharted soundtracks. Tent City and Rampage repeat this theme before Hunt For The Ray Sphere moves us into more guitar-led territory and takes the tempo down a little.

Anything For Trish stands out for it's broad range of styles, instruments and tempos. But unlike elsewhere, the chaos is restrained long enough here for a melody to thread its way through the mess. Then we are moved onto cinematic track The Truth, which works for its understated aural relief next to the fire of other offerings.

From here the album takes a mellower turn. The most serene of which is Pleasant Empire, with synth and piano creating an oasis of calm within an otherwise frenetic-sounding experience.

The mix of loud and rhythmic throughout, which is paired with an eclectic range of styles. It isn't the most palatable work you're going to hear - certainly next to the likes of Mass Effect 2 or Assassin's Creed 2, but it has an individual and unique quality. If you want something a bit different that isn't just going through the motions then the InFamous original soundtrack will provide that originality with electrifying intensity.

You can support Cat by buying Infamous