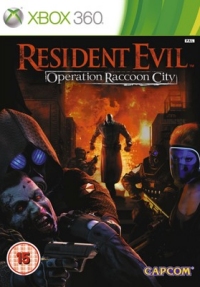 Other GamePeople columnists have reviewed this from their perspective - huh?:
Reporting Gamer (360)
Tech Gamer (PS3) 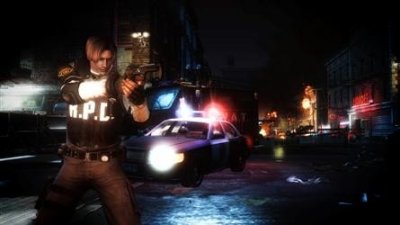 What does the Resident Evil series mean to you? The jolt of terror as a zombie dog crashes through a window? The building tension as you walk down a dimly lit corridor? The heart-hammering thrill of fighting off Ganados as they swarm in through the windows of a broken down house?

Here's one it's unlikely to be: the sheer tedium of hiding behind a box and exchanging bursts of gunfire with a generic special forces soldier who is hiding behind another box about twenty feet away.

Operation Raccoon City is a squad-based shooter that frequently resorts to shootouts like this, where both you and your enemies are using cover and only popping up to fire on the other.

These exchanges become an extended whack-a-mole game of whittling away at your enemies with bursts of gunfire, extended because these special forces dudes are so hardcore they can seemingly take a dozen automatic rounds to the face before dying, even on the game's easiest difficulty level.

So the ritual game-loop kicks in. Duck, wait for enemy to pop-up, pop-up yourself and fire, duck again before your target can return too much fire... and so on.

It's at moments like this, popping and dropping, that you may well ask as I did, what the hell has any of this repetitive gunplay got to do with Resident Evil?

It's not like Operation Raccoon City isn't based on strong narrative material. It's set during the Raccoon City incident of July 1998, an event told most notably in Resident Evils 2 and 3 - back when it was still current affairs rather than ancient history - and subsequently revisited in the two Resident Evil: Outbreak games for PS2, as well as the Darkside Chronicles Wii rail-shooter.

It's understandable that the series should constantly revisit the fall of Raccoon City, as it's the most potent setting the series has ever had. I'm only half joking when I describe it as The Greatest Story Ever Told, as it's a variation on one of the best and most flexible scenarios in modern fiction: the shining metropolis brought low by disaster.

A zombie outbreak in the city streets is an endlessly flexible canvas for telling stories about modern civilisation pushed beyond its limits, and ordinary people finding how they respond to the decay of civilisation and a barbaric new reality.

Now, admittedly, those two Resident Evil sequels weren't exactly the smartest or most convincing takes on this scenario ever told, but they were tremendously atmospheric, and told a crazy interweaving narrative that saw the events of Resident Evil 3: Nemesis retroactively wrapping themselves around the narrative core of the second game, revisiting and recontextualising environments and characters from that initial sequel.

Very strong stuff, then, with memorable characters and monsters: rookie cop Leon S Kennedy; demented police chief Brian Irons; the horrible long-tongued lickers; Jill Valentine in that weirdly inappropriate tight-top/short-skirt/long boots combo; and of course Nemesis, the near-unkillable baddy who pursues Jill and whose DUH-DUH-DUH-DUH-DUHHHH theme tune can still cause near-faints in veterans of the series.

Resident Evil: Operation Raccoon City revisits these memorable events, locations and characters, dropping a team of elite Umbrella Special Services (USS) mercenaries into the infested city and setting them off on missions to familiar and much-loved locations: the Raccoon Police Department, the Dead Factory, the underground lab of William Birkin.

While they're there, this team of super-cool codenamed badasses crossover with the original games, encountering Leon and Ada doing what they were doing in Resident Evil 2, reprogramming an off-road Nemesis to set him back on Jill's trail, and repeatedly facing-off with rival merc Nicholai as he causes trouble for pretty much everyone.

It all sounds like glorious fanservice, the sort of clever reinvention of old material that weaves new storylines around old, allowing fans to revisit familiar favourites while casting new light on events we've already seen.

A shame, then, that it consistently falls flat, fumbling much-loved material and failing to recapture any of the old magic in terms of gameplay, storytelling or aesthetics.

For starters, let's go back to that cover-shooter game-loop I described at the start of this review, and how poorly it fits into the Raccoon City scenario, at least as we know and love it.

Resident Evil 2 and 3 were about using scarce weapons and ammunition to fight through the remorseless hungry dead in a city devoid of other human life. Survivors were scattered and dwindling, their numbers reducing as each game went on. Raccoon City was quiet, lonely, claustrophobic, a place where narrow alleyways echoed with zombie moans and the harsh sound of pistol fire.

In Operation: Raccoon City, the place is a sodding battlefield. Yep, there are more zombies which should theoretically keep the sense of horror high, but now there are also your USS characters and a seemingly endless legion of US Special Forces guys, all emptying clip after clip of ammo at each other.

Loud, relentless, and completely contradictory to everything that makes Resident Evil work.

While the zombie hordes can be a threat - especially when mutating into the savagely fast Crimson Heads, an innovation from the Gamecube remake of the first Resident Evil that is effectively re-used here - they're mostly a sort of nuisance, a shambling barrier between two heavily armed forces pinging bullets at each other.

Resident Evil 4 and 5 were criticised for an over-emphasis on action, but they had nothing on Operation: Raccoon City in terms of sheer level of thoughtless gunplay. It's loud, relentless, and completely contradictory to everything that makes Resident Evil work.

It even undermines the merits of the stories it borrows from. While the game feels constrained by previous continuity, dodging around the plotlines of those earlier games and even failing to show vital moments of plot because they've already been done - the bungled Umbrella attack on William Birkin is only heard by the players through a closed door, for instance, rather than actually seen - the insertion of all this military action into Raccoon City makes a nonsense of those storylines.

It's not just the ability, gifted at the end of the final mission, to contradict continuity by bumping off major characters before they can escape Raccoon City that disrupts the storylines of the earlier games, it's the very presence of the USS guys and their Special Forces enemies that contradicts both the letter and spirit of the original game's plots.

While the Outbreak games already introduced a good few new potential survivors into the Raccoon City scenario, they were at least vulnerable humans who could easily be imagined to be running around just out of Leon or Jill's line of sight. While slightly diluting the doom-laden scenario of the original games, they didn't break the fiction entirely.

It's nonsense, worse than the Outbreak games with their daft additions like plant zombies and undead elephants.

Operation: Raccoon City presents a city overrun by the military, a completely different place to the desolate landscape of the original scenario. If the US military can just drop in-and-out of the city at will, throwing whole squads of Special Forces at the USS to try and aid Leon's escape, then that completely undermines the slow, painful struggle to flee the city we saw in Resident Evil 2.

It's nonsense, worse than the Outbreak games with their half-dozen potential new survivors and daft additions like plant zombies and undead elephants. In fact, the original Resident Evil: Outbreak's opening cinematic did a far better job of showing players the attempted assassination of William Birkin than Operation: Raccoon City's turgid mission does, even though the latter ostensibly puts the player right at the heart of those events.

In twisting the original scenarios into a new, action-packed form, Operation: Raccoon City repeatedly loses sight of what was good about the originals and serves up utterly flavourless material instead.

The playable USS characters are a charmless bunch of gas-masked super-humans with daft codenames and stilted foreign accents, who karate-kick zombies so effectively their survival never seems in any doubt, leaving the horror entirely absent.

Nemesis, oh beloved Nemesis, turns up at one point and is reduced to just standing around waving his chaingun

Old environments from previous games are re-created blandly, the twisty, confined environments of earlier games turned into wide open boxes in which large groups of people can shoot at each other, completely lacking the ornate claustrophobia they had before. All the quirk and character of the originals have been lost to something bland and generic.

In line with the fact that you're playing - either online with other players or offline with some impressively dumb partner AI - as part of a squad, the number of monsters is multiplied accordingly, but this doesn't make for an entertaining threat so much as a grinding, repetitive battle of attrition against bullet-sponge Tyrants and wave after wave of Lickers.

Nemesis, oh beloved Nemesis, turns up at one point and is reduced to just standing around waving his chaingun, with none of the malicious threat and unpredicatability he showed in his debut game. Here he's just another dumb boss battle.

As a team shooter, Operation: Raccoon City is competent enough. Its mechanics work, with a matchmaking service and front-end organisation that's actually a bit better than the odd online systems seen in some recent Capcom games. But that technical clarity is really all the game has going for it over its stablemates.

Outside of the main campaign, competitive multiplayer is glitchy and not very good, with bog standard game modes. For fan purposes the biggest deal is probably Heroes mode, which allows players to take-on or play as lots of different characters from the original games, but holds little appeal beyond getting to see these old friends in action.

With a short campaign length, Operation: Raccoon City practically demands that each mission, along with the attached versus modes, be addictively replayable, but there's little strategic spice or ingenuity in the levels to keep players coming back for multiple playthroughs.

There's still strong appeal to revisiting the Raccoon City incident, and I can't blame Capcom for going back.

If Operation: Raccoon City is not much cop as a squad shooter, as a Resident Evil title its a disaster, only serving to remind players how good Resident Evil 2 and 3 were first time around.

There's still strong appeal to revisiting the Raccoon City incident, and I can't blame Capcom for going back to that well, but please, please next time could they refrain from reworking those events as bone-headed shooters and just remake the originals?

An HD-friendly remake of Resident Evil 2 and 3, locking together those inter-weaving plots into a single game but keeping the basic gameplay intact beneath the new visuals, would be a great thing indeed and a worthy return to Raccoon City.

In the mean time, this current squad-based outing isn't worth the effort.