Other GamePeople columnists have reviewed this from their perspective - huh?:
Teen Gamer (360)
Scripted Gamer (360)
Mousey Gamer (360) 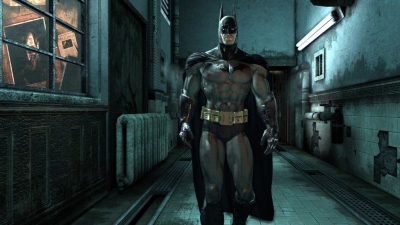 Batman Arkam Asylum on 360 and PS3 is the best Batman game to date, granted, but how good is the Challenge Mode. I take another of my close looks at this aspect of the game and discover that Challenge Mode offers the purest combat experience to those who are prepared to put in the effort to fight creatively with precision. Not only that but the experience of achieving the Perfect Knight Bonus is one of gaming's most satisfactory intrinsic rewards.

Flow. I read a newspaper article recently that said one should find the thing in life that provides you with a sense of flow and then somehow try to incorporate that into your day to day life - and, ideally, into your way of making a living. That's the key to happiness, so the article said. Well, I think I've found a little bit of that magic in Arkam Asylum's Challenge Mode.

Flow is impossible to define, but I know that I've found it before: in mastering tricky guitar solos, in riding my bike down a big hill and singing the theme to Neverending Story in my head, and after a three hour surfing lesson, almost sort of half-catching a wave. Surfing's hard.

Unfortunately, I've not quite managed to forge a career in rock music, or as a bicycle courier or pro-surfer. Fortunately, I've always found more fun in having a really wide variety of experiences than spending hours on one activity.

Most recently, I've found flow in Batman: Arkham Asylum's extraordinary combat system. I really don't think I have played a game that makes you feel so in control and powerful. Like all the best things in life, it's incredibly simple to get your head around, but actually incredibly tough to master. The story mode (also excellent) of the game never really requires you to be anything other than satisfactory in combat, but thankfully there's a mode that allows you to focus on nothing but fighting!

Somehow each Challenge Mode attempt felt like I was making progress and keeping the flow running for a little while longer.

I decided to spend my time mastering the first level of Challenge Mode - Intensive Treatment. The challenge I set myself was to get through all four rounds of rushing thugs without taking a single hit - the Perfect Knight Bonus offering an appealing +5000 points.

Unfortunately, the aforementioned hard men had a nasty habit of spoiling my beautiful flowing violence with a short, sharp whack from a length of piping. Each bit of damage I took was accompanied with a frustrated sigh, a press of the start button, a slow-restart and a learning experience with a vow I'd never make the same mistake again. It probably took me over 100 attempts. How did I not get bored?

Somehow each Challenge Mode attempt felt like I was making progress and keeping the flow running for a little while longer. Still, after my first few attempts I had to go into the Settings menu and turn the dialogue right down - the repetitive taunts from the bad men were unbearable.

Intensive Treatment offers all sorts of potential avenues for creatively dispatching with villains. You can knock down a few baddies with your first few strikes, then pick one up and throw him into an electrified force field, then, without skipping a beat, you can leap across the room, elaborately break a madman's wrist (this is ok in the context of the game, although I don't normally condone violence), spot that one of his friends is ready to attack and use all his force against him to take him out, then jump an improbable distance to take out the last guy by punching his face into the concrete for maximum points.

Alternatively, you could start by using your grappling hook to disarm a few baddies and bring them shambling towards you then stun them with a deft swish of your cape. The animation for each attack and counter is deeply satisfying and at times breathtaking. It feels cinematic, especially when the last hit of each round is slowed down to super-slow motion.

You feel powerful when you are disposing of swathes of wrong ‘uns without them being able to touch you.

I guess the secret that kept me playing is that it is difficult, but not by any means impossible. It encourages you to think and use all the weapons at your disposal awarding more points for variety in your attacks. You feel powerful when you are disposing of swathes of wrong ‘uns without them being able to touch you, and it's visually very impressive to watch as the destruction unfolds. It's a heady and addictive mix and definitely worth a play if you've already finished the story mode and are looking to squeeze a bit more gameplay out.

Playing the later Challenge Modes is a little less pure. Sometimes the camera seems to leave you positioned so that you'll get hit without any prior warning which feels unfair and ultimately frustrates. But Intensive Treatment is worth persevering with over and over again. It's something rare and wonderful in a videogame, a moment of real flow that is still a joy to revisit and perfect even months later. Perhaps it's time you paid another visit to Arkam. A real joy.