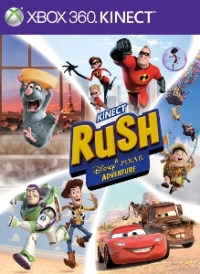 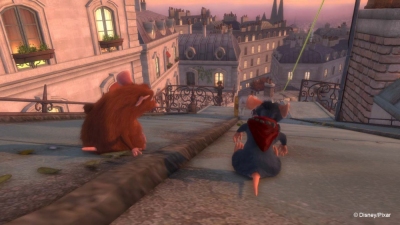 Kinect Rush is more than Disneyland Adventures for Pixar films. It brings both ambition and common sense to steer the Cars, Toy Story and Incredibles themed exploration and adventuring in an engaging direction.

All but the most dedicated families will be struggling to keep up with Microsoft's Kinect games. After the initial blush of titles like Kinect Adventure, Dance Central and Kinect Sports came a range of third-party offerings that worked because they created genuinely new ways to play - Kinectimals, Fruit Ninja, Leedmees and GunStringer to name a few.

Then came a second wave of Kinect games that stretched the technology further. Whether it was Disneyland Adventure's open world exploration, Once Upon A Monster's interactions for pre-schoolers or Just Dance 3's four player support, these games changed the definition of what a Kinect game could be.

These are not without their shortcomings or challenges. Each step forward into increased interactivity comes with more demands on the sometimes fussy Kinect controller. In the home it can take a while to get it setup perfectly, although the reward in terms of game-play is usually worth it.

Now we have, what might be called, a third wave of games that build on earlier successes and broaden the range of franchises as well as the demographic. Their challenge is to bed down the more ambitious gestures that Kinect now identifies and find a happy balance between ambition and reliability.

Now we have, what might be called, a third wave of games that build on earlier successes and broaden the range of franchises as well as the demographic. I spent time with Kinect Rush today, the first new Kinect game from Microsoft this year. Rush's headlines sound like a Pixar-ification of Disneyland Adventures, but while the main structure and approach is heavily informed from previous successes, it actually walks its own path and introduces both innovation and refinement.

Partnering with Pixar, Microsoft brings the polish and flare of Disneyland Adventures to a Pixar virtual world. Five of the Pixar films take the stage: The Incredibles, Up, Cars, Ratatouille and Toy Story. Each offers a unique adventure tied to the related film as well as a set of unlockable upgrades that players can win and apply to their characters - from rockets to Jetpacks.

The relentless pursuit of improvement here speaks as much as Microsoft's ongoing commitment to the Kinect technology (that I guess will feature centrally in their next console) is impressive. It is this sustained delivery to their motion control platform that has made Kinect such a success as much as the technology itself. Sony, and even Nintendo, could take note of the sheer amount of player-pleasing effort going on here.

The already solid Disneyland mechanics are tweaked and extended to meet the demands of the more dynamic Pixar world. This is most evident in the exploration levels that task the player with performing certain tasks in a 3D environment, putting Disneyland's theme park to work in a more gameplay oriented way.

Before starting, the player's body and face are scanned by the Kinect sensor so that their size, shape and colour can be applied to which ever character they are controlling in the game. If you have a red top on, then your car will be red in Cars or your robot character will have a Red suit in Incredibles. It's tech lifted straight from the Kinect Me Fun Labs application that had my kids in shrieks of laughter last year. It's good to see these used in anger in a full game -- not only to legitimate Microsoft's riffing approach to Kinect innovation but also the genuine benefit these ideas bring to Kinect gameplay.

This process, once complete, deposits players in an exploreable overworld that is similar to the theme park in Disneyland Adventures, although without the real-world theme park equivalent. This world connects the different adventures together and offers a space in which children can familiarise themselves with the torso-twist to turn and run on the spot to move mechanic -- again a refinement over the wand pointing navigation in Disneyland Adventures.

The Cars game looks every bit as good as the stand alone 360 Cars titles.

Once the novelty of this hub world has worn off it seems likely that families will opt to pull up the quick menu (both arms up) and select from the pop-up options. Either way this makes the magical transition from the children's human avatars to the particular Pixar world and character they have chosen.

Having only five choices for these adventures puts more pressure on each one to deliver than in Disneyland Adventures. There, the sheer choice meant that there was something for everyone. Happily then, the reduction in choices has been matched by more depth in each film world.

The Cars racing game, for instance, looks every bit as good as the stand alone Cars, Cars Race-o-rama, Cars Mater's Tall Tales and Cars 2 360 offerings. You steer around the track by grasping an imaginary steering wheel (as we have seen in Forza 4), pump it to apply boost, jump to avoid obstacles and triggering missiles with their hands.

This is a proper kart racing experience along the lines of Kinect launch game Joyride. It lets you choose your route around each circuit, opt to jump and take shortcuts all just by steering. Although this does also mean that you can end up facing the wrong direction -- the bane of driving games for pre-school players -- things are kept simple enough for most ages. There is some sensible assistance when you get stuck up against a barrier which I thought was a particularly good idea -- something I suffer from as much as my kids on Kinect games.

Although the game has a PEGI 7 rating, my youngest (4) wouldn't find very much to upset him here. There is a fair degree of mild peril (lava, volcanoes and the like) as well as some high impact rocket shooting, but this is all in line with the sort of thing you find in the films. It really depends how you deal with these sorts of topics in your family.

If my children (4, 6 and 8) were going to play this alone I would want to play it through beforehand, but that caveat notwithstanding, I'd then be happy to set them loose on it. The crocodile section in The GunStringer is still a topic of conversation when we discuss things that scare us, and means I'm now a little carefully with these experiences.

The Ratatouee adventure extends the peril with some on feet chases that offering a more expansive world to explore and more items to collect. Two players can work together in all the games, contributing towards a common score much to my kid's competitive chagrin, but this now extends to performing certain tasks collaboratively as well. There is one particular moment in the Ratatouee game where one player stands on the end of a spoon so that the other can jump on the other end and catapult them up to a hard to reach level.

Bringing players into the world as well as the story is an intelligent next step.

The range of actions asked of the player are more exuberant style (compared to the sometimes hard to trigger Camera, High Five and Wand gestures in Disneyland Adventures). Actions like picking up objects, throwing objects along with the usual waving, pointing and jumping gestures steer sensibly away from too much fine control and keep the focus on reliability rather than wow-factor. For kids this is absolutely the right way to go.

Beyond all these technical concerns the most engaging aspect of Kinect Rush is the prospect of spending more time in these Pixar worlds. Although most have had games before, but there is something about playing hands free in Ratatouille's Paris or Toy Story's wild west or The Incredibles remote island that my kids find really exciting.

They roundly enjoyed Disneyland Adventures and dipping into different parts of the Disney stories, but Kinect Rush's ability to bring them into the world as well as the story is an intelligent next step for these kinds of experiences.

With Kinect Rush being released in the UK on 23rd March for RRP 39.99, it won't be long before you can try it out for yourself. This is another game that I'll be trying out on our Family Gamer TV families and will report back in the next show with first hand footage of how they get on.

You can support Andy by buying Kinect Rush