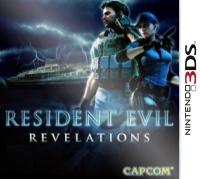 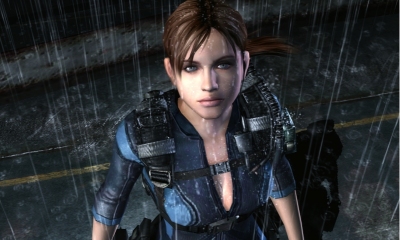 Resident Evil Revelations 3DS brings together the smoother gameplay of recent games in the series with the atmosphere and intensity of earlier installments.

Some puns are unavoidable - Resident Evil: Revelations looks like, well, a bit of a revelation on the 3DS, capturing the visual style of Resident Evils 4 and 5 on the tiny handheld.

On picking up the demo unit at the Eurogamer Expo my first impression was that the game looks gorgeous, and the over-the-shoulder view introduced in Resident Evil 4 is well-suited to 3D.

The demo level sees Jill Valentine wake up in what appears to be an old mansion, and start exploring. It's a classic Resident Evil set-up, with a familiar mood of sinister opulence. Needless to say it isn't long before Jill is attacked, getting into perilously ammo-depleting combat with pallid, skinny monsters closer to something from Silent Hill than the usual Resident Evil zombies and mutants.

In combining the perspective and mechanics of the recent games with the setting and atmosphere of the original game, Revelations feels a lot like Resident Evil 5's DLC prequel Lost in Nightmares, which was for many long-term fans (myself included) closer to the true flavour of the series than Resident Evil 5 itself.

The interface works well in 3D, although the 3DS stick feels a bit loose when aiming, which could lead to growing frustration when valuable ammo is wasted and a Game Over screen reached due to that imprecision. However, judging by the close confines that Jill finds herself in most of the time it will be hard not to hit something.

With no sign of Resident Evil 6 on the horizon, Resident Evil: Revelations looks like the nearest thing we'll be getting for a while. It's no surprise that it looks closer to capturing the appeal of the series than the squad-based Operation: Raccoon City, but it's more of a revelation (note to self: stop doing that) that it looks like potentially being a more solid Resi game than part 5.

With the potential for providing a more rounded Resident Evil experience to please old and new fans alike, Resident Evil: Revelations might not just be a solid addition to the series, but a 3DS system-seller for survival horror fans.

Resident Evil: Revelations is released for 3DS in 2012.

Resident Evil Revelations is a properly scary 3DS game full of classic survival horror gameplay. Whether enough people want a horror 3DS game is yet to be seen, but this could be a great way to introduce a new audience to the joys and intricacies of the franchise.

Resident Evil: Revelations has been exclusively developed to take advantage of the 3DS's capabilities, as opposed to Resident Evil: The Mercenaries 3D reworking of old material on the new system.

Revelations is set between the events of Resident Evil 4 (Wii) and Resident Evil 5 (360) and sees Jill Valentine and Chris Redfield investigate a deadly threat on board a stranded cruise liner. The pair fight for survival as they explore the dark and claustrophobic environments both at sea and on dry land.

It promises a return to the classic Resident Evil style of puzzles and exploration rather than the action oriented approach of more recent titles. This may well be a step towards engaging the more casual market of the 3DS, but still grates against talk of using the 3D engine to generate fear in the player.

The success of Revelations will rest on its ability to engage existing fans of the series and newcomers. It hopes to do this with a narrative designed to be approachable by both groups of gamers, and controls that are flexible rather than restrictive as in previous games.

Resident Evil: Revelations doesn't have a firm release date and is likely to be late 2011 at the earliest.

You can support Paul by buying Resident Evil Revelations