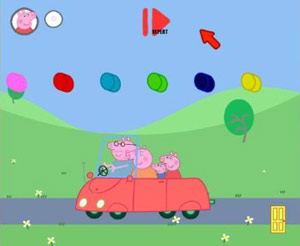 Peppa Pig: The Game is a pleasantly packaged set of Wii distractions perfectly pitched at Peppa's pre-school fan base.

As the parent of a baby daughter, I know that Peppa Pig is an irresistable part of my future, and that resistance is useless. Peppa's influence over pre-school girls is somewhere between that of a superstar and a cult leader, such is the cartoon pig's charismatic sway. Few young minds can resist her porcine charms.

So, when Peppa Pig: The Game landed in my "to review" pile, it offered me a chance to take a glimpse into my very near future, once my daughter is old enough to want to develop her own taste in TV shows. And, to be honest, it wasn't all that bad.

The Game is less a "game" and more a virtual toybox of non-competitive activities. There's no over-arching hub or storyline, just a pictorial menu leading to eleven simple and (mostly) intuitive playthings for kids to mess around with.

Peppa Pig's world is one of clean, pleasant banality, a domestic family life charmingly illustrated with bold lines and bright colours. Each activity is presented in simple, two-dimensional graphics, with an animated introduction and epilogue and full voice-acting. On-screen text is kept to a minimum, with simple diagrams by way of instructions.

As pre-school entertainment goes, it's innocuous and amiable stuff.

As pre-school entertainment goes, it's innocuous and amiable stuff, domesticity simplified for the understanding of small children. The activities see Peppa, her brother George and their parents do everyday things and play everyday games: hide-and-seek, washing the car, flying a kite and making pancakes.

Some are recognisable game types: Car Trip is a Simon Says repetition game, memorising button sequences and repeating them. Others are even simpler playthings, like a virtual colouring book which has the option to save your efforts and look at them again later.

Some of the activities have optional time limits, and most are scored, which adds some potential drive to the games, but really these are freeform for little ones to faff around with free from objectives or targets.

It seems well judged for its target audience of very small children.

There's very little in Peppa Pig: The Game to divert older children, never mind grown-ups, but that's hardly the point. Unlike a lot of licensed kids' games, it seems well judged for its target audience of very small children, thoughtfully presented for pre-literate gamers and ideal for providing short bursts of welcome distraction.

You can support Mark by buying Peppa Pig: The Game