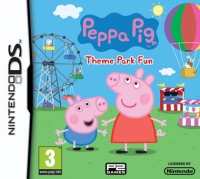 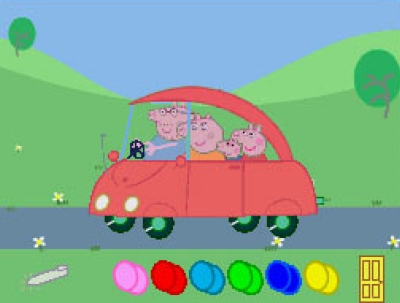 Peppa Pig has been popular with each of our children (3, 5 and 7) and is still the go to DVD for our youngest - with the older ones happy to watch them too. If you've not seen the show, it follows a family of snorting pigs through every day scenarios. It's jovial and jolly and actually really well animated.

The last couple of years have seen a range of videogames to complement the series, Peppa Pig: The Game and Peppa Pig: Fun and Games on both the DS and the Wii. They both offer a range of Peppa branded minigames aimed at younger players, nothing particularly revolutionary about that I know. However, as soon as we played the games it was clear this is something a little different to other TV videogame tie-ins.

Rather than a simplified version of a grown up game, these feel like they have been designed just for kids - and very young kids at that. They don't have a score or time limit and progress is simply mapped by John Sparkes' excellent narration.

There are eleven or so minigames in each collection, that offer a different challenge. Washing bikes, collecting apples, feeding ducks and dressing up are the order of the day. Each activity has been well designed and feels realistic to interact with. The environments and objects you can move around benefit from the sort of physics you find in grownup games -- it's a minor point but really contributes to the quality of the experience.

They have been designed just for kids - and very young kids at that.

My kids seem very quick at picking up on games that take short cuts with their delivery because they are for a younger audience. TV tie-ins in particular are often quickly discarded. It's quite telling then that Peppa Pig has been played for much longer than similar games on these systems, and happily with less intervention from me.

The DS Peppa games are more popular than the Wii version for the younger players (3 and 5) in our house, I think in part because they struggle with the Wii-mote pointing mechanic that can be rather frustrating. They also seem to like the whole tactile nature of the DS stylus - and I'm quite happy for them to spend time improving their pencil skills.

It's quality rather than quantity that is key here and Peppa has invested heavily here.

Our older kids, one of whom (7) is too old for Peppa really, actually quite enjoyed the greater challenge of the Wii game and would work together to complete each task. Seeing them playing the game on the TV you really couldn't tell the difference between that and the real show - apart from their excited interactions which seem like a better way to spend their time.

Peppa Pig: The Game and Peppa Pig: Fun and Games join the select few games in our collection (like Dora and Diego games) that deliver a quality experience for very young players. It may seem that you don't get as much for your money compared to a grownup videogame, but actually it's quality rather than quantity that is key here and Peppa has invested heavily here.

You can support Andy by buying Peppa Pig: The Game